Recently I’ve been looking at the old TSR Gangbusters RPG, and I’m really exciting about the prospect of playing and/or running in a Gangbusters campaign. I love the setting, the idea of a city-based campaign with recurring NPCs, and the Pulp Noir feel of the world. The combat rules of the original TSR game are a bit byzantine, so I am looking at other rules systems (probably one of my own invention) to use when playing the game. 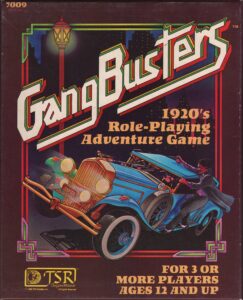 In addition to the core rules, the original game has five game modules. Wayne’s Books does a great job of documenting each of the Gangbusters’ products.

Mark Hunt has taken the trademark and updated the game to use D&D (B/X edition) rules. Mark is also putting out new adventures for his version of the product. It’s great to have those rules and the new adventures as options for 1920’s crimefighter style gaming.

I’ve updated my ‘Top Stuff I Want To Run Someday (Early 2022 Edition)’ list to include this game. Watch this site for updates on our future Gangbusters exploits!