I’m fresh back from PAX Unplugged! Here some highlights. I also have a few dozen additional photos related to the below you can check out.

In Nov. 2012, I joined a game group that a guy named Nathan was setting up to test drive D&D Next. The group has been gaming together each week ever since! I had to (sadly!) drop out due to scheduling issues, but I’ve stayed in touch and count these guys as some great friends whom I game (or work) with every chance I get. I was able to get together with them at an AirBnB home in Philly and play games all weekend between attending PAX Unplugged. It was a blast! 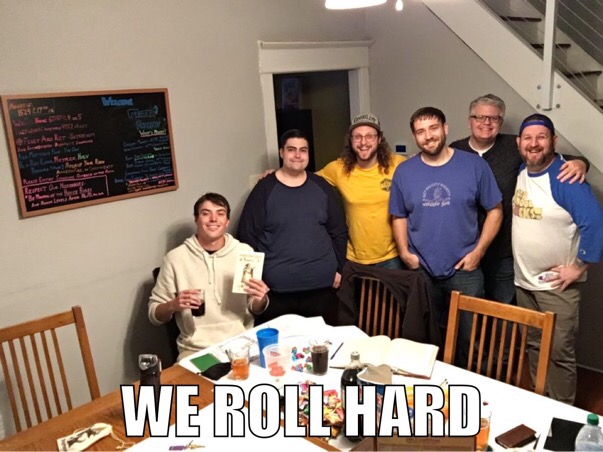 My distributor was selling my game Dungeonesque! Was cool to walk by and see it on sale. The other side of that rack had Savage Worlds and Traveller. Pretty cool to share space with those iconic games! 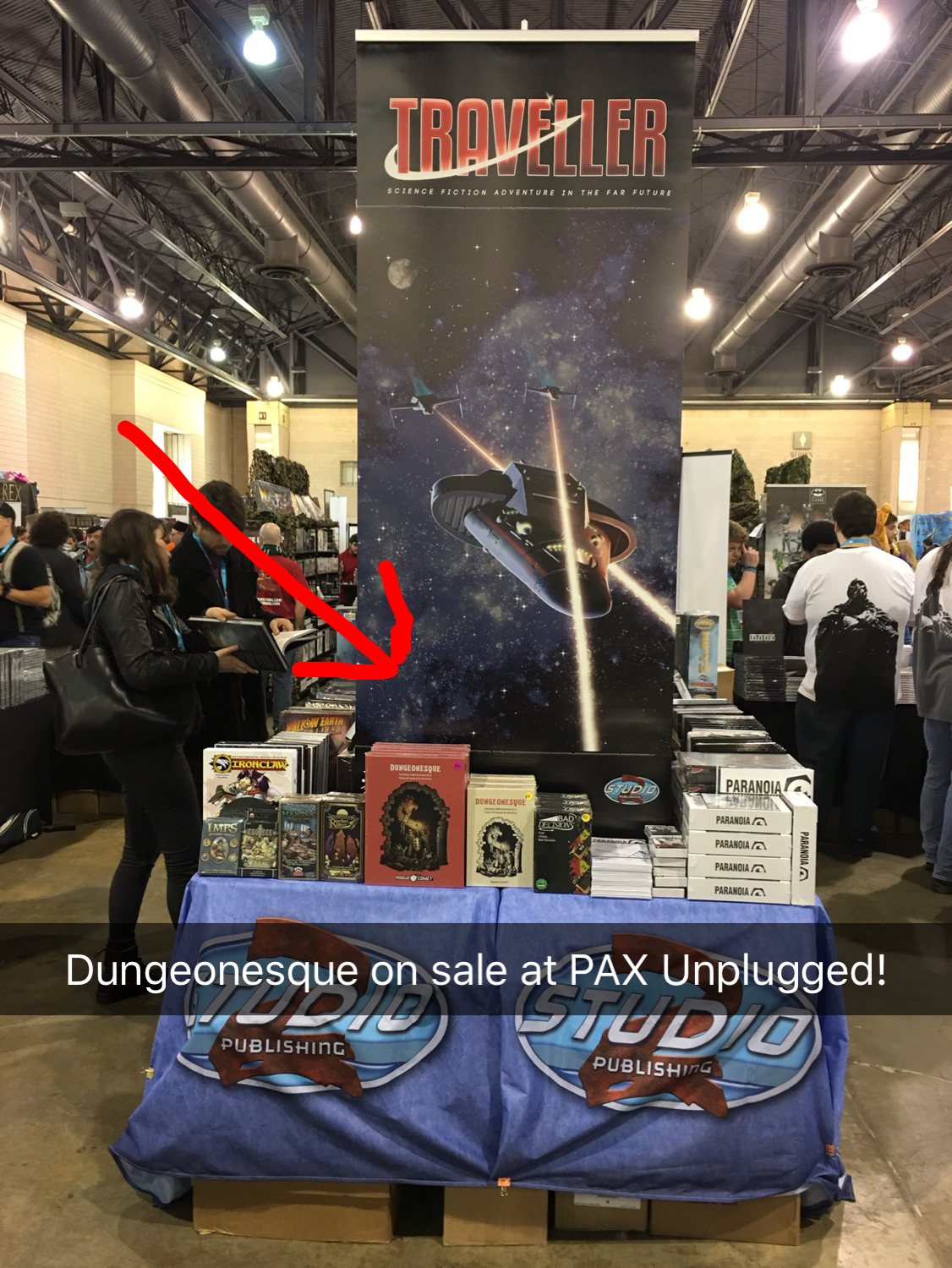 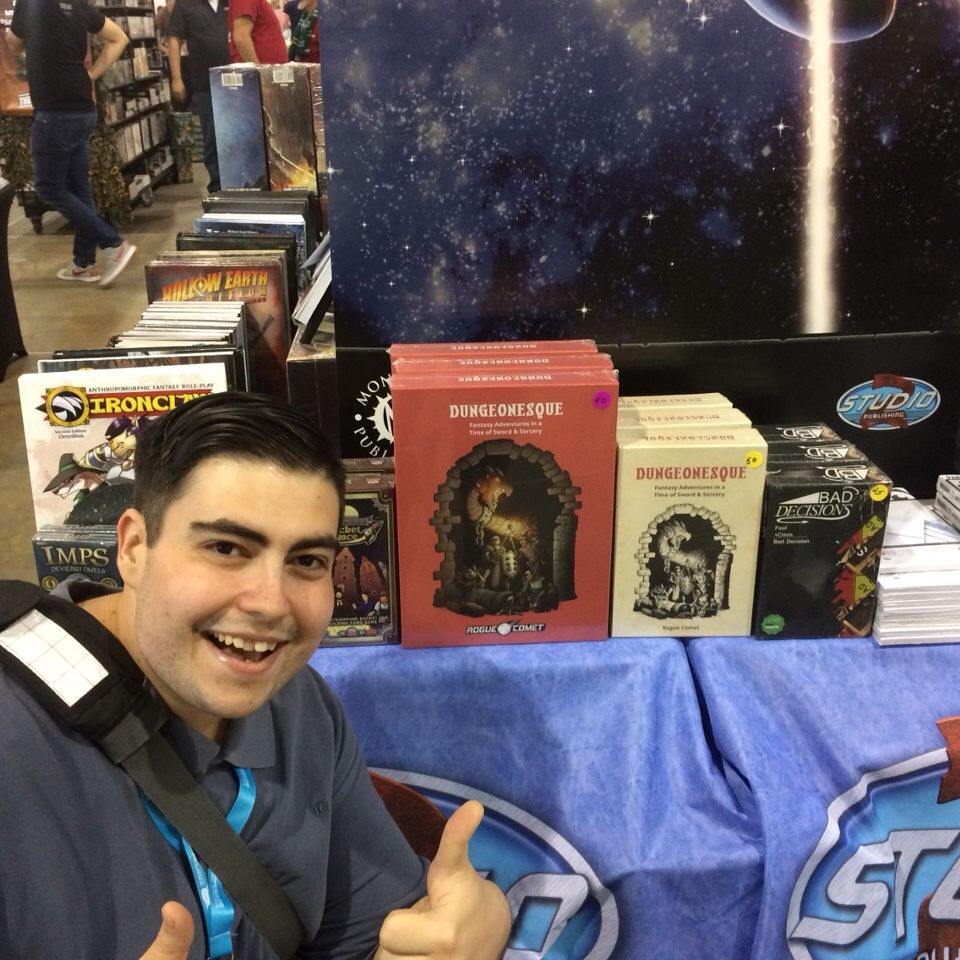 I was thinking of John B. and his interest in superheroes. The three supers RPGs that I say on display were:

(by the way, I asked the Green Ronin staff, and the official pronunciation for their company is “Green RonEEn” (rhymes with “bean” or “lean”)). 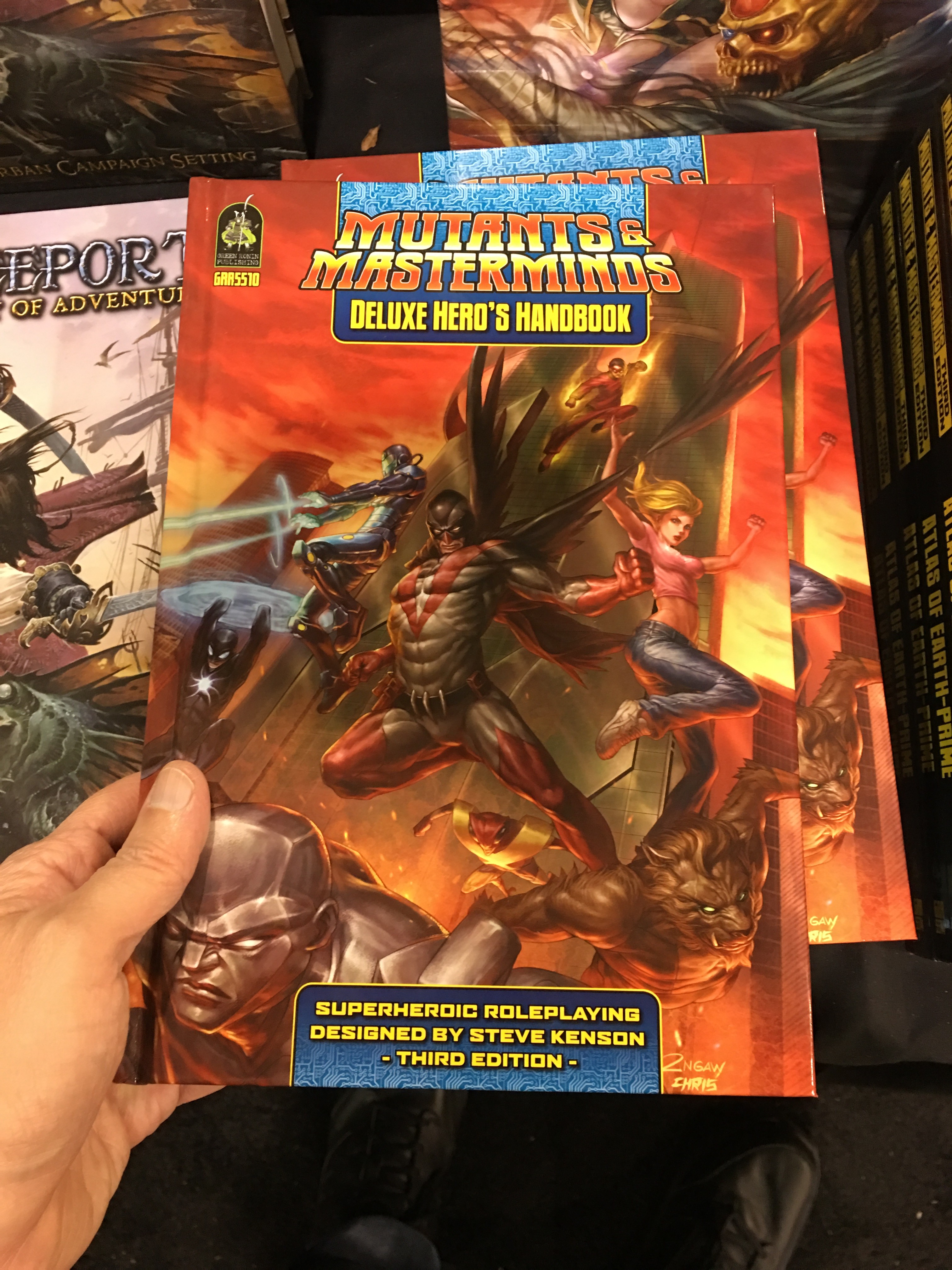 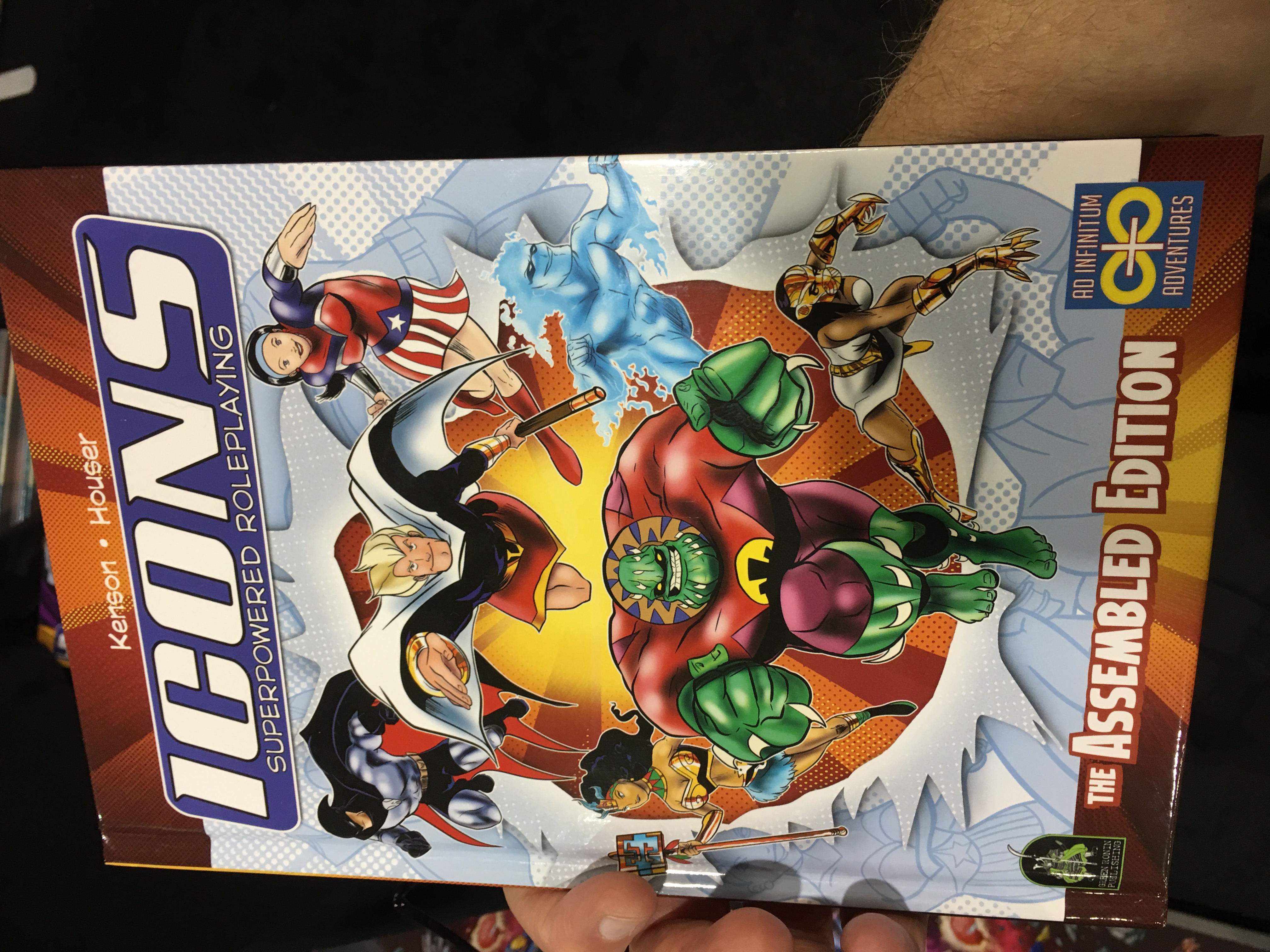 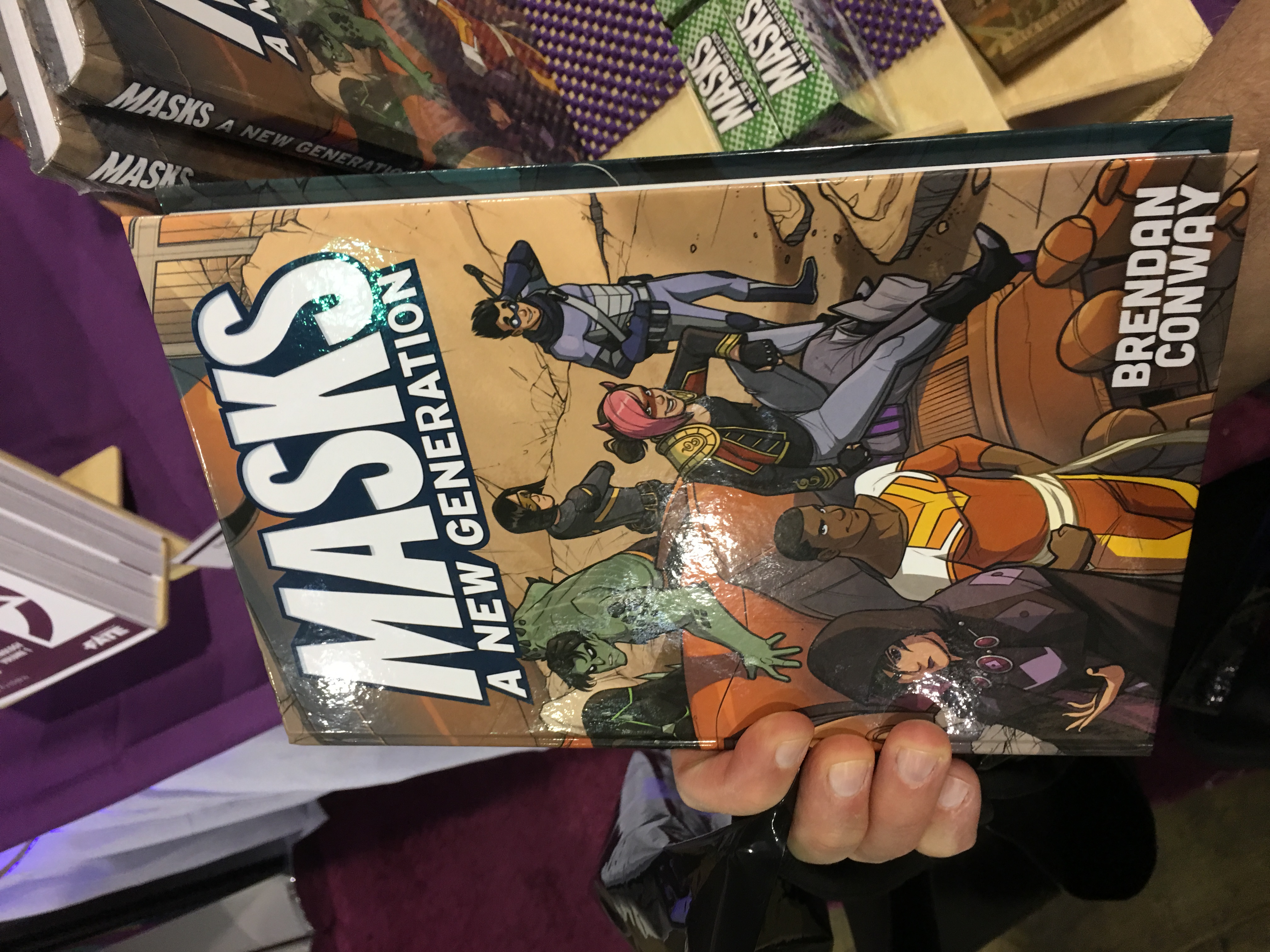 Fate of the Norns

I know Mason and Todd particularly love the setting of Fate of the Norns (even if there is some debate on how easy/hard the Rune mechanics work, and if their alt-Norse mythology is sufficiently ‘historical’). I saw their booth at the con. More pictures in the full album. View more photos in the  full album. 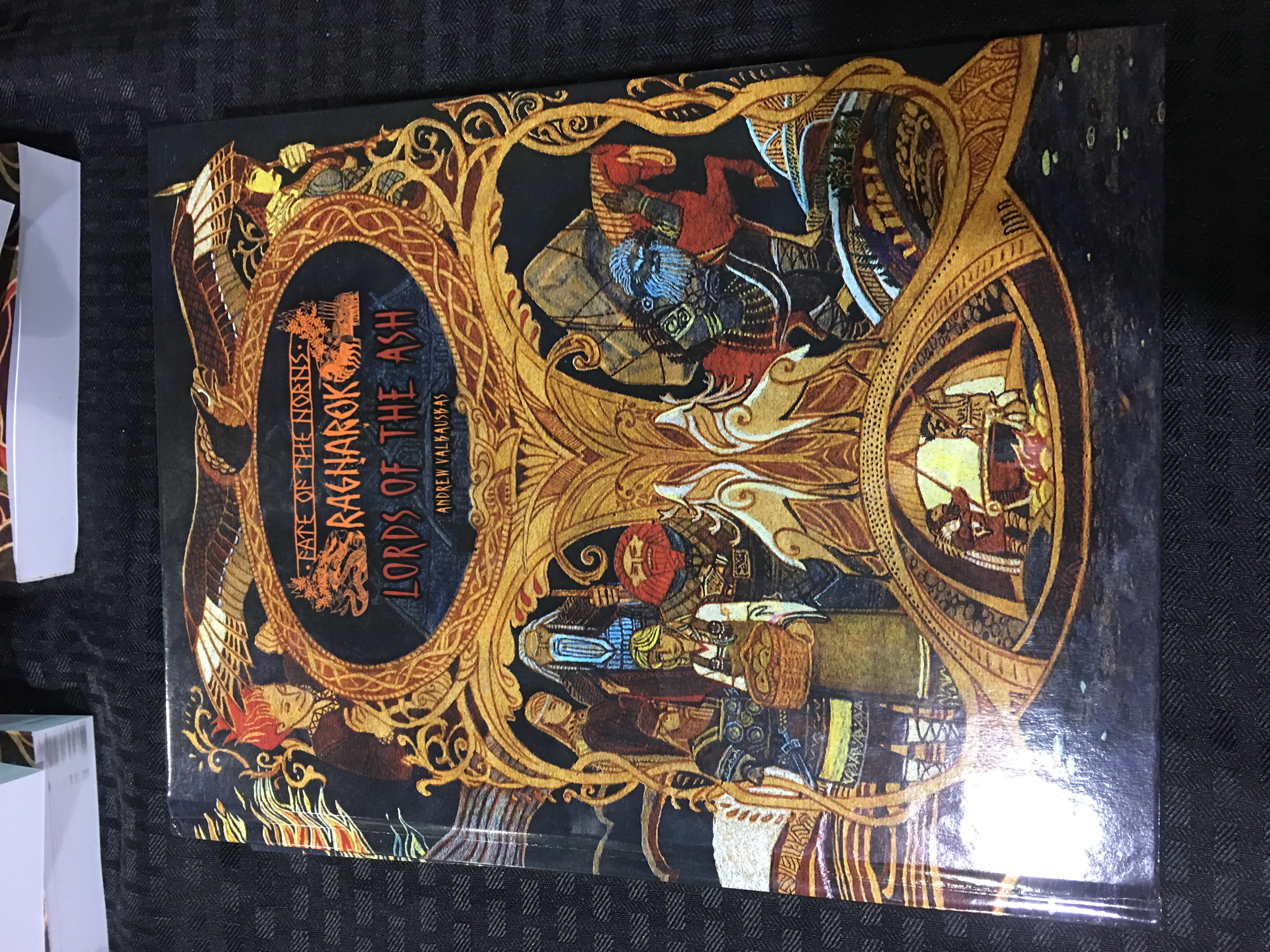 Fate of the Norns

I know Robert has shown interest in microgames focused on Dungeons. I saw two on sale. I bought a copy of ‘One Deck Dungeon’ if anyone wants to check it out. View more photos in the  full album. 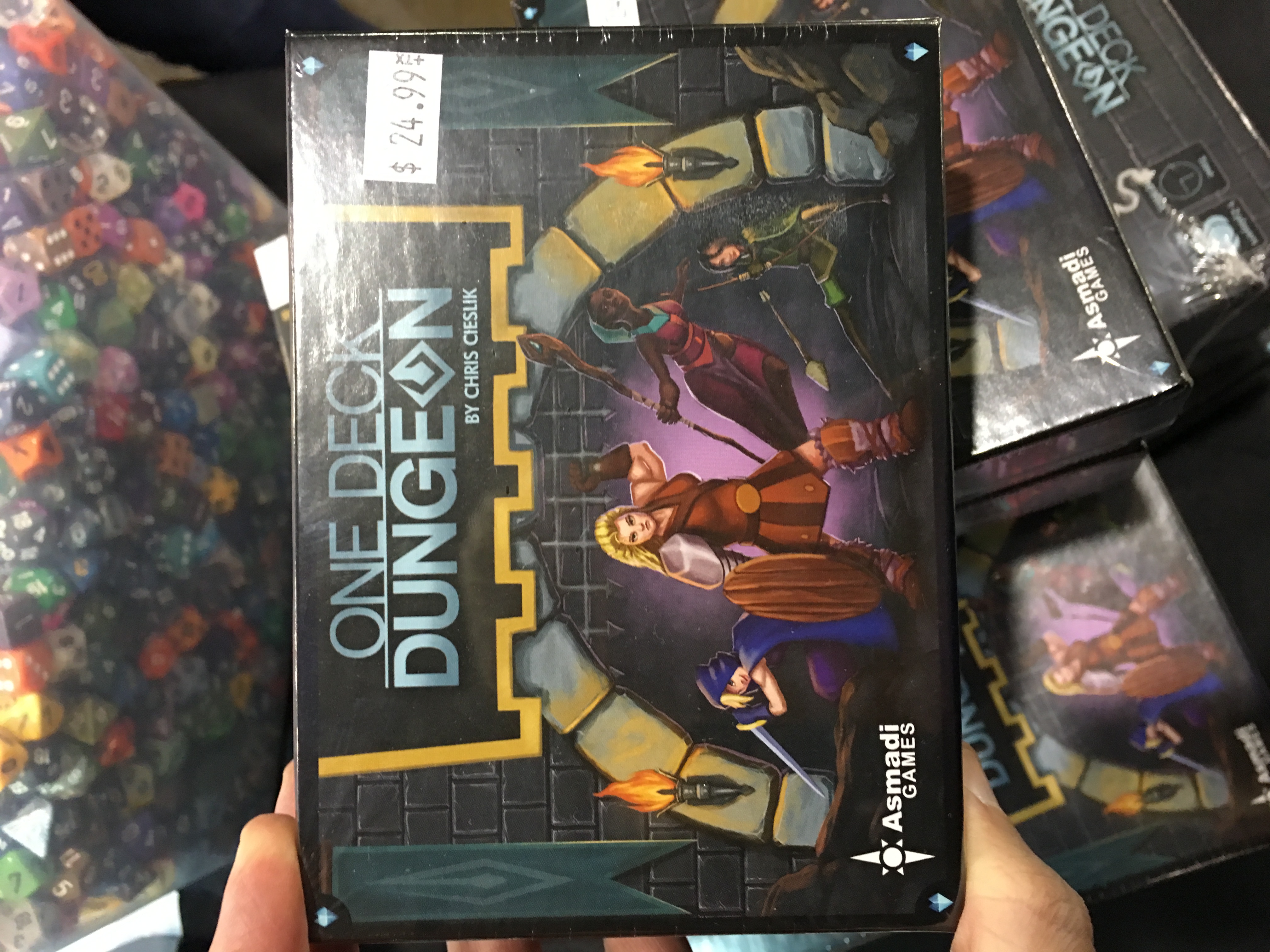 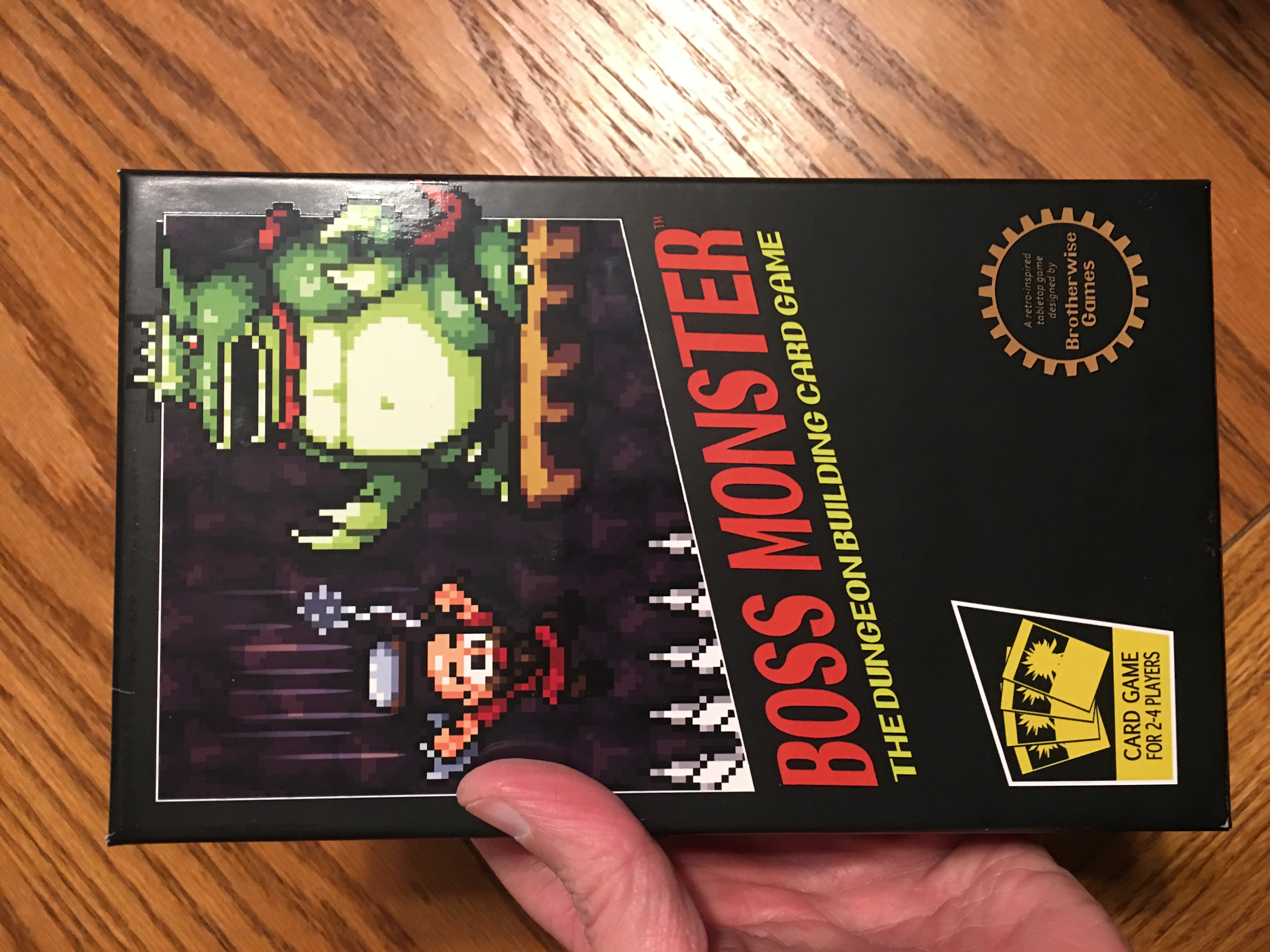 Got to see the actual copies of the PolyHero Dice – Wizard Set which Mason and I backed. Should arrive to us in the mail in December. 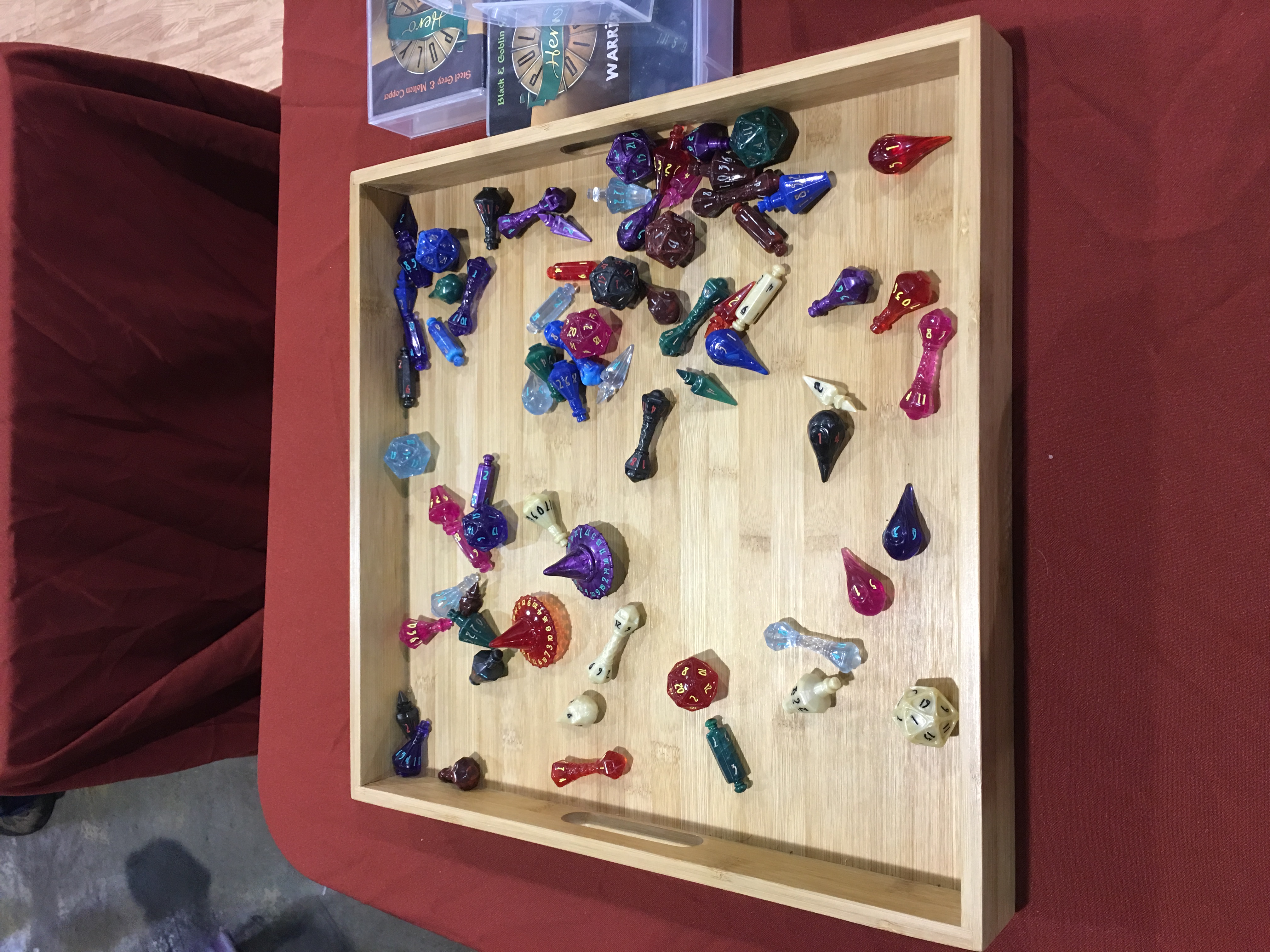 Boy, do I have a soft spot for the old Steve Jackson microgrames of OGRE and G.E.V. After seeing these models on display, I might just put this game on my Christmas List. 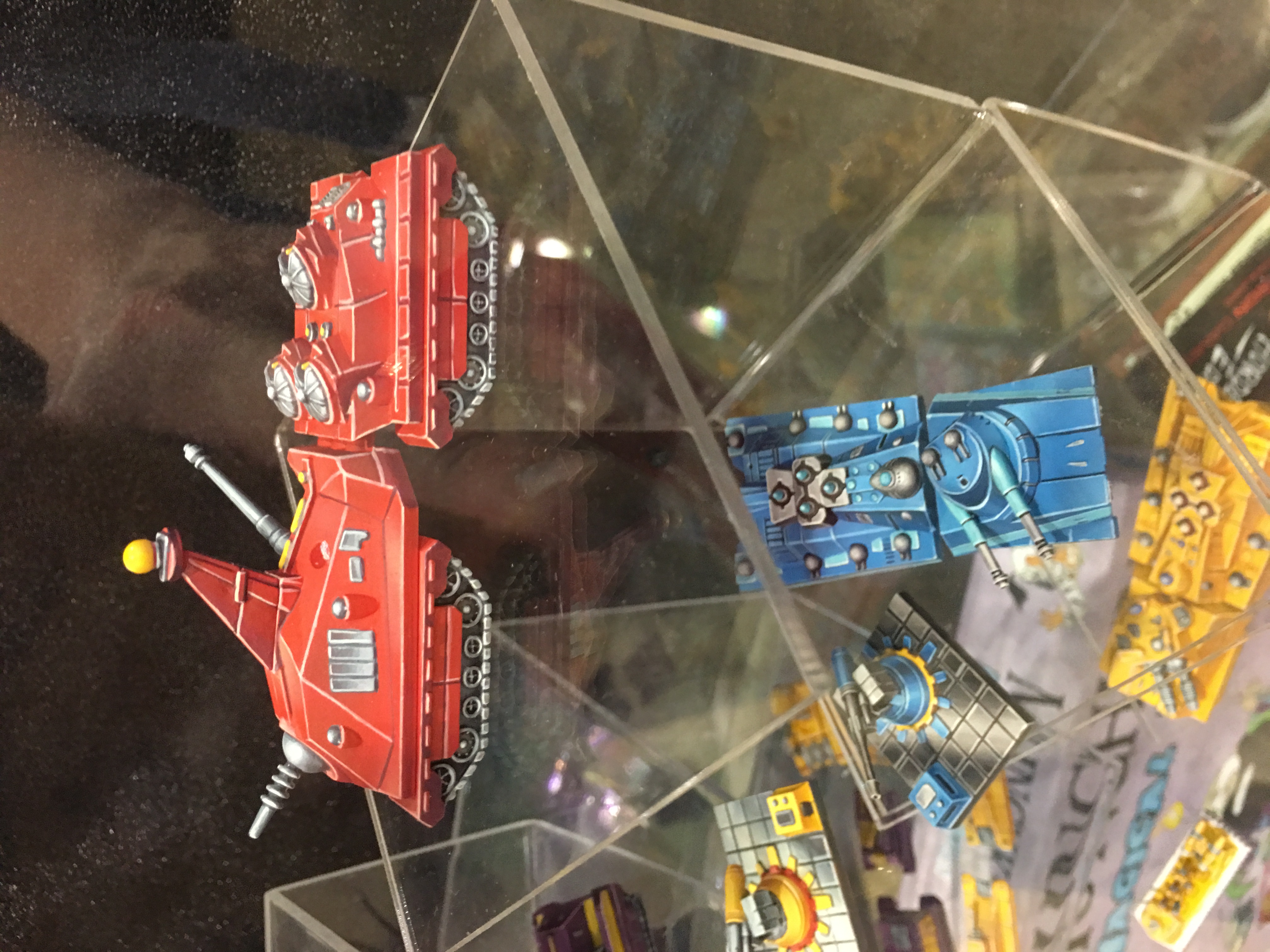 Kevin has talked about A Quiet Year a few times. Would love to play it sometime. Cool, minimalist game. 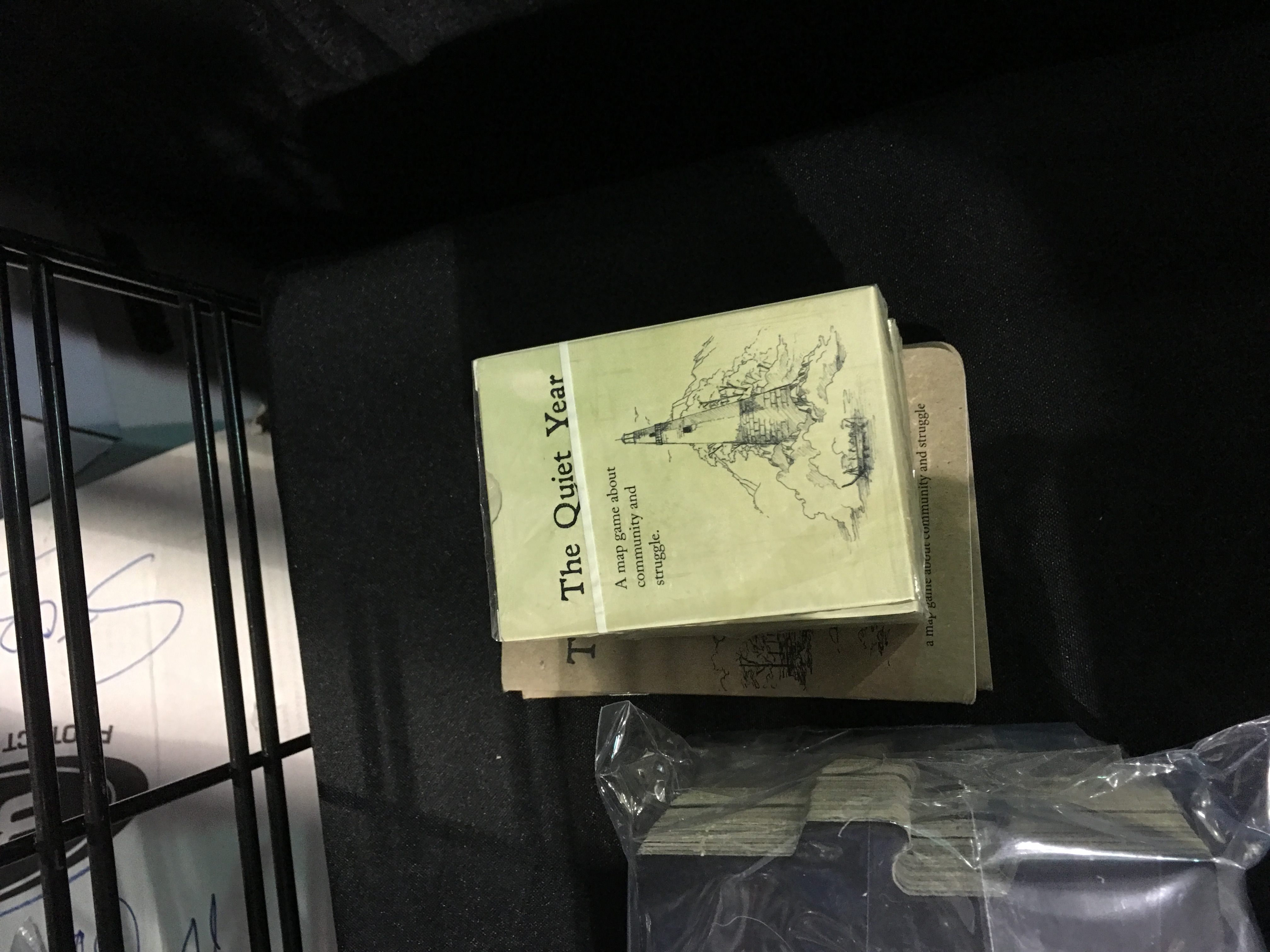 John S. is developing his Gladiator themed game, so it was interesting to see Arena Rex again at PAX Unplugged (they were at ReaperCon last month). 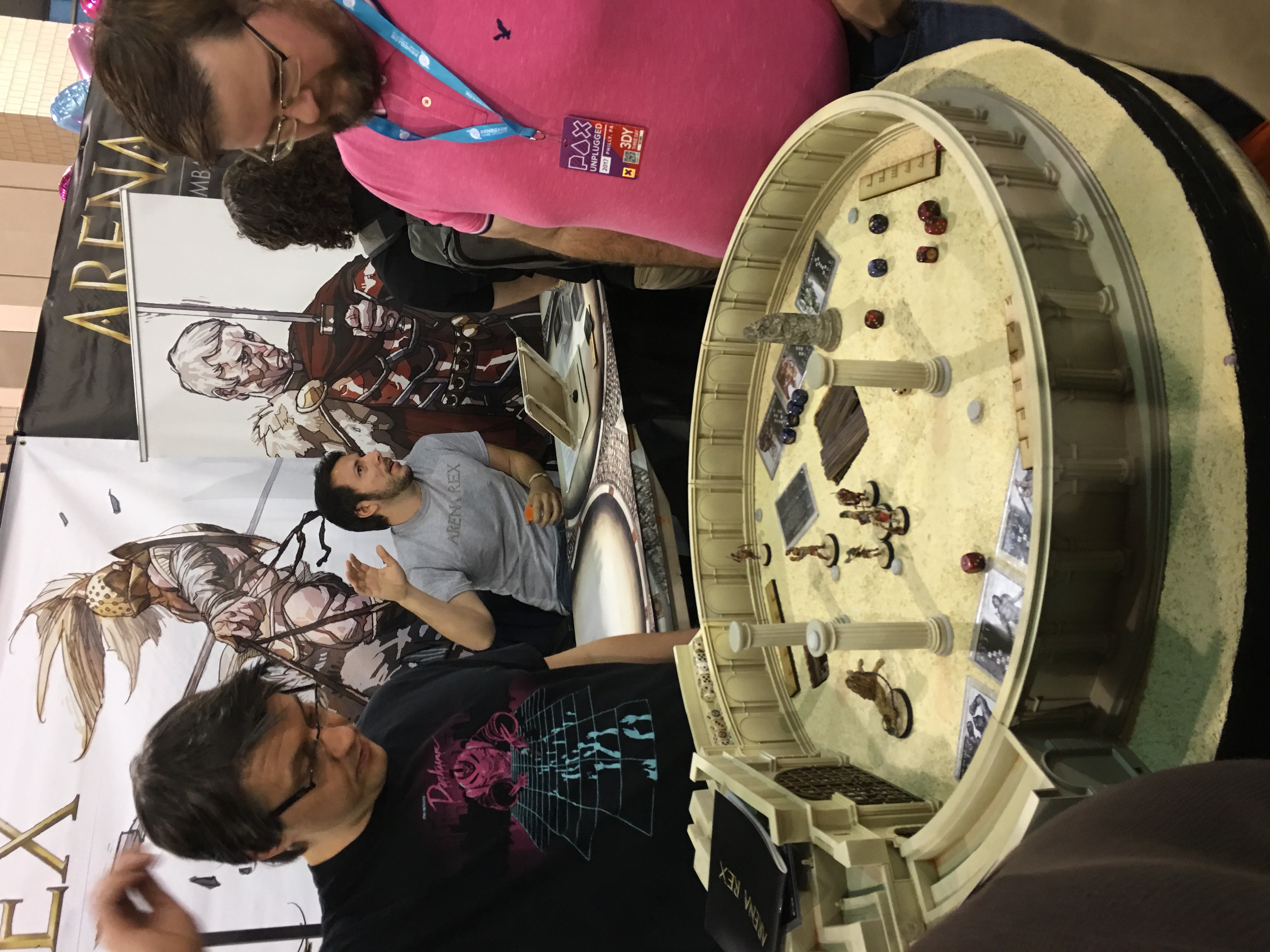 Chris Cocks (head of Wizards of the Coast) spoke. Seemed like a great guy with a vision for doing cross-overs between Magic: The Gathering and D&D (among other things). Showed a bunch of preview art for future Magic card lines, but nothing new on the D&D front. 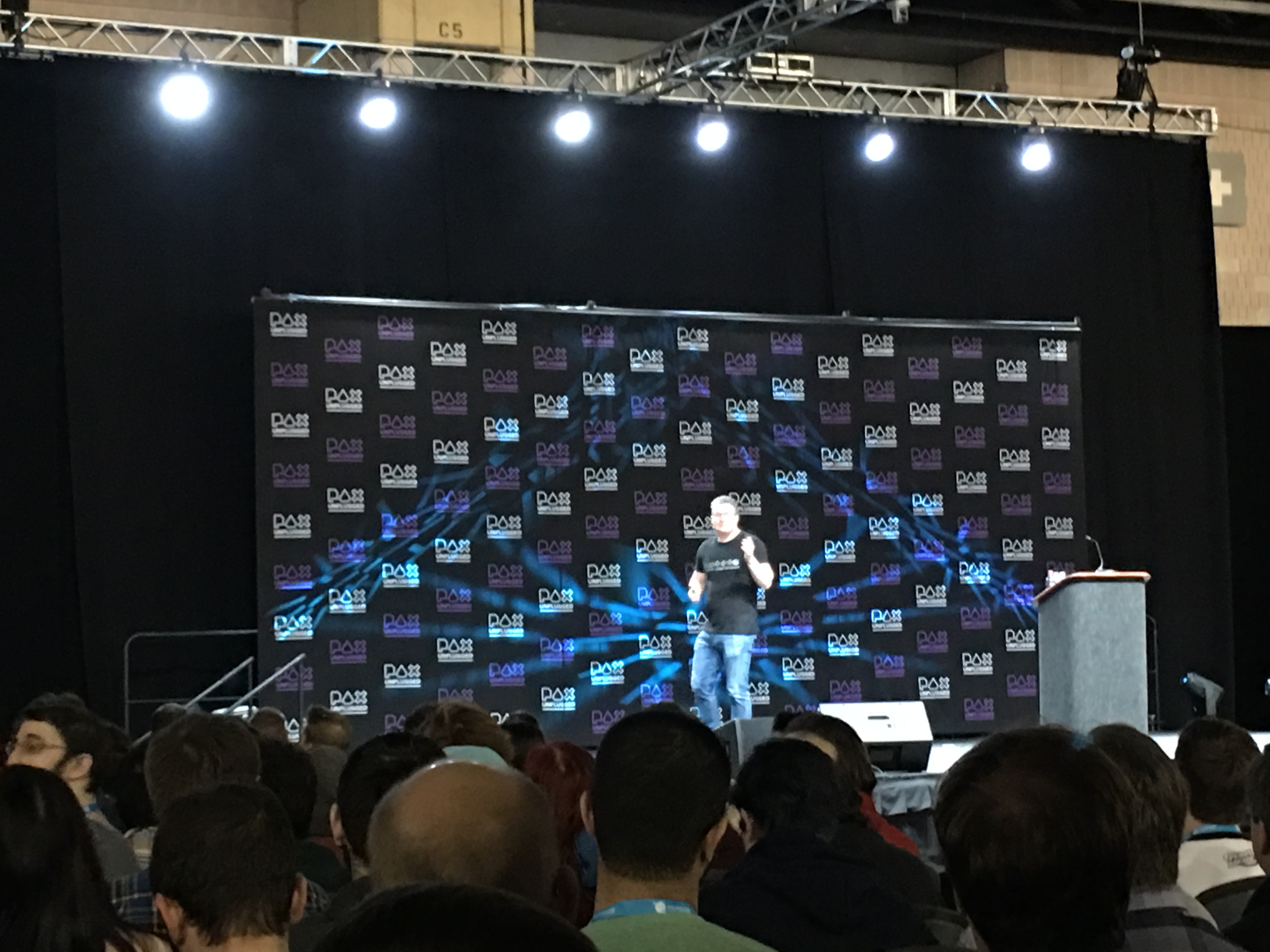 Back at the AirBnB, I ran another beta test of my Stranger Things inspired game, and let folks choose the monster. The gang chose a Khargra from the Fiend Folio. Love the art! Was fun to run this creature. Ended up playing out a game like Tremors with the creatures bursting out of the ground. Feedback was great on the rules! I think this has solid potential so I will continue to improve and expand this game system. 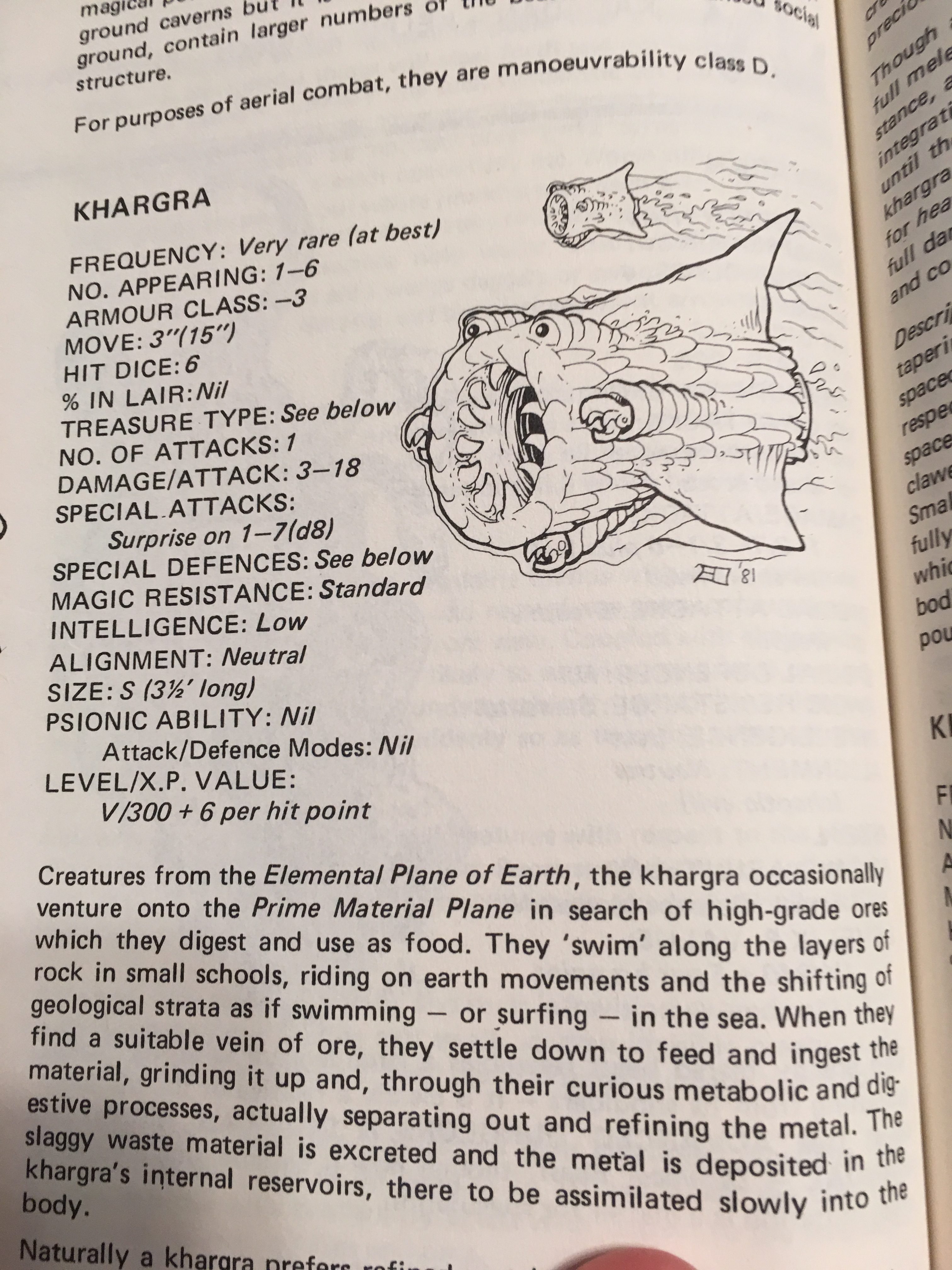 Monster from the Fiend Folio

So overall what did I think? 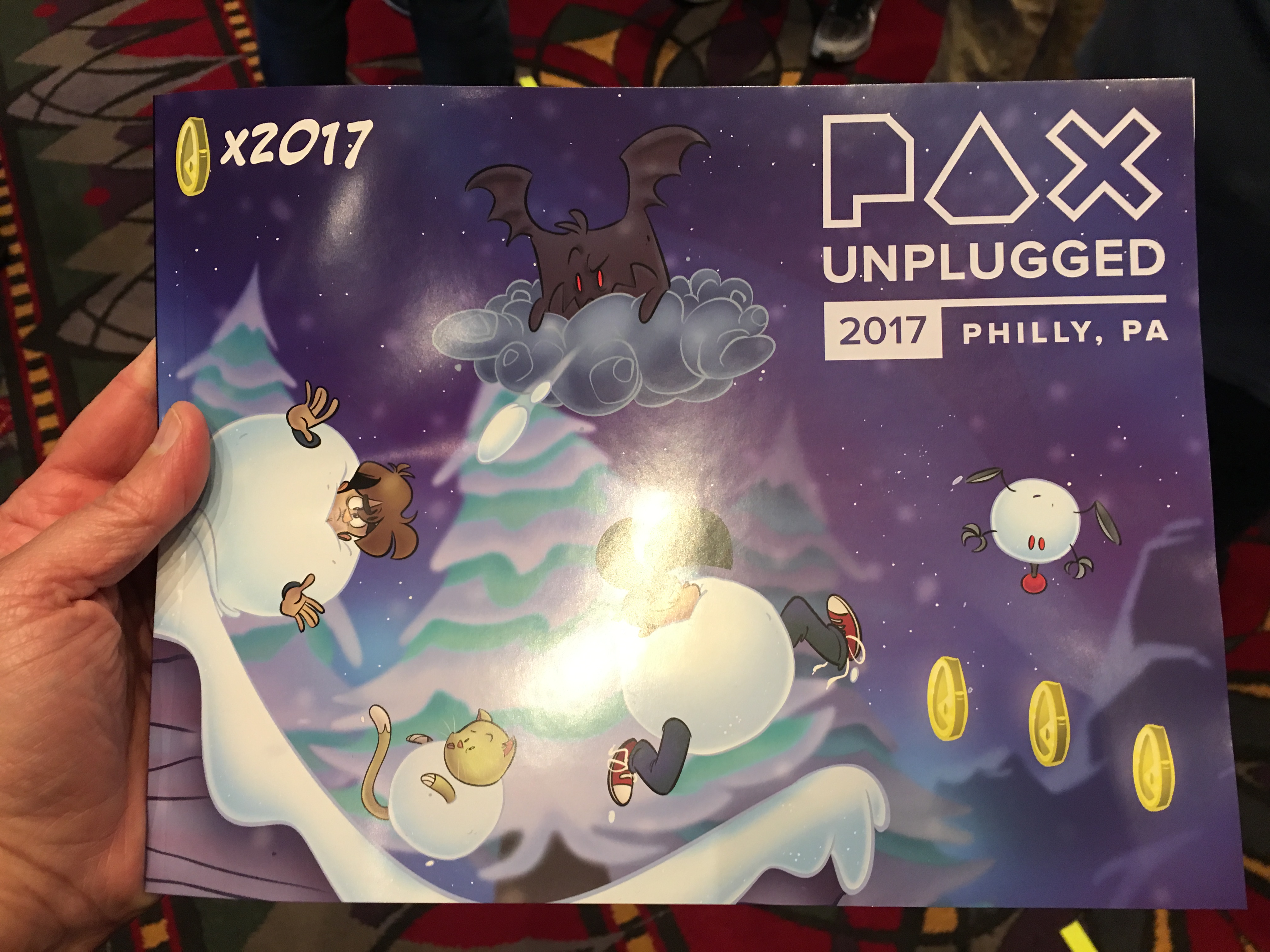 Feedback is underway on the PAX Unplugged Forum (I left some comments there) and on Reddit. Quick summary: they ran it like a PAX Expo which resulted in long lines for games, and no ability to preregister for anything. Expo hall was great, but gaming left much to be desired. Hopefully they’ll learn from their mistakes.

Robert, you should read the above to get a general sense of what RPG players are looking for at cons, plus some interesting ideas on how to improve the experience which could apply to Lone Star Game Expo.