Two separate Board game Sundays have resulted in a shift in the standings. We have played the newly acquired War of kings (which by the way, is a terrific board game for anyone interested in awesome. Anyhoo, two games have been played, a hard (four player) and a six player game (ultra hard). In the first game, Kevin P won, and was awarded 4 points. Brooks, Martin and Robert all tied for second, and each received 1 point. In the Second game, played this last Sunday, Robert won, received 6 points, Nick came in second, receiving 4 points, and Patrick came in third, receiving 2 points. So the overall standings, with one more board game to go this year, is:

Gifts cards to Common Ground games will be awarded after the last game of the year, which will hopefully be an epic War of Kings finale. 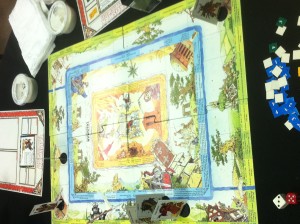 In the third session of the Board game Grand Prix, we played a starter game of Splendor, and then a lengthy game of Talisman. Unlike our earlier game of Talisman, this time the game turned on us, with Robert and Patrick being turned into toads, Emory harassing Martin’s character throughout the game, and almost all having very bad luck. More of a grind quite frankly. We’re putting Talisman on the shelf for a bit.

Robert 2 points for victory at Splendor

Nick 4 points for victory at Talisman

Nick 5 points
Brooks 4 points
Robert 4 points
Patrick 4 points
It is anybody’s contest at this point.  There is still time for people to jump in.

In the second incarnation of the Board Game Grand Prix, we had seven players crowded into a game of Talisman. Yes, the old, second edition version of Talisman; still one of the best classic character building board games there is! Since we exceeded capacity, we called it an Extra Hard game. Finishes:

So the ultimate standings so far this year: 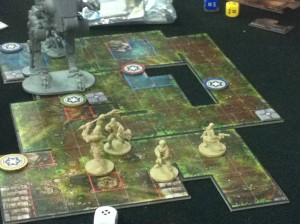 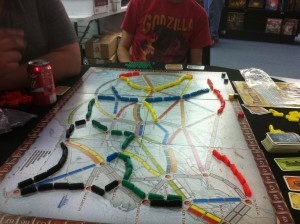 In the first meeting of the Board Game Grand Prix, four games were played at Common Ground Games.

We determined that there should be four tiers of games, Tough, Intermediate, co-op and opening.  If you win a tough game, 1st gets 4 points, 2nd gets 2 points.  An Intermediate game winner gets 3 points, and 2nd gets 1 point.  For co-op, the runner automatically gets 1 point.  The group each gets a point if they win, and the runner gets another point if they don’t.  Opening gets 2 points for the victory, but no second place points. So the tally with week one done:

At Christmas time, three gift certificates will be given to the overall first, second and third place finishers. Next week we are at it again as I pushed my DnD game one week.