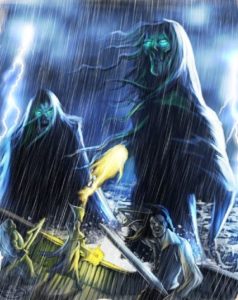 With the Diary recovered and the the city of Baltimus on alert the Crew quietly slipped away and headed towards Brigandy Bay.

Reading the journal they discovered the events that lead to the rise of the sea hags:

Three triplets and their sister were discovered around the bloody body of their father. The triplets used dark magic to kill several guards before they were subdued. That night the Mallus triplets, Mala, Maka and Mana murdered their younger sister, Mara as well.

King Amemnus and the Jury (which included Byron Baltimus) sentenced the girls to death by drowning. Staked to the beach and with the tides rising they cursed the King saying:

“You will die, king! We curse you with our dying breath. We curse you to drown as we will drown. And when  our corpse floats beside ours, we will return and have our vengeance on your people as well”

The sisters died but upon their death it rained in torrents for months, as the world drowned the desperate citizens of Ograpog threw their king into the sea and upon his death the rain stopped but then Sea Hags awoke. They manifested as giant Hags and destroyed the remaining city and escaping ships.

Troubled by this news but learning the names of the Hags the Crew decided to reach an agreement with the Pirate Coalition in Brigandy Bay for safter passage and port. Reaching an accord they headed to the Flotsam sea in search for water from Earth and after much searching they did, but the deserted hulk they found the water on was infested with the Hags minions and a fierce battle raged as they struggled to obtain the earth water and flee. With the help of some Doreen treasure hunters they managed to succeed and escape with their prize

This summoned the Maiden who is revealed to be the Hags sister Mara. She is stuck between realms and tormented by her sisters dark magic but is trying to stop them via people from Earth. She tells the Crew they are well on their way but in order to defeat her sisters they will need a the water from Earth, the Heart of an Archmage, that what the Kraken have lost and the lost sword of King Amemnus…not to mention some courage and might of their own!