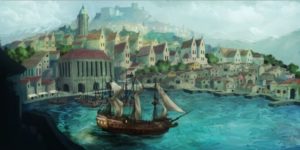 A Visit to Baltimus- Part 1

The Crew arrived in Baltimus only to learn that Byron Baltimus (one of the Jurors seen in the Vision) passed several months ago and is survived by his only heir Bruno. Unfortunately they found that Bruno was not accessible directly. During their search they found a few possible ways to speak with Bruno. One was to request audience via BEIC and Lazenby and another was to wait to possibly speak with him at the monthly Town Hall, or to attend Bruno’s monthly Gala. While searching they also discovered that Byron was a prolific author and found several excerpts from his personal diary regarding the flood, this indicates that there might me more written down elsewhere.

Another option presented itself by an old man named Mannie Morkan. They learned from Mannie that Bruno hosts a lavish party monthly for the wealthy of the city. However after the party there is a more “private” event in Bruno’s quarters which involved pretty women, powerful men, drugs and alcohol. Unfortunately Mannie’s granddaughter was invited to one of these parties, attended naively and was treated very poorly. Mannie found his granddaughter abused and dazed on his front step the following morning.

He wants revenge for his granddaughter and is willing to provide an invite to this party and the sword Veralis as payment for the promise Bruno’s death.

The Crew is left with a decision: How will they get close to Bruno? There are many paths but which one is right?

Our search for a resolution to the Sea Hags has brought us to Baltimos in the hope of speaking with Byron.  Having been a judge at the hags’ trial we believed him to be a good source for the names of the hags.  We have since discovered that he passed several months ago.  Fortunately, this is only a minor set back.

Byron is survived by his son, Bruno.  By all reports he is a brute of a man who cares little for the welfare of others.  Regardless, it is reasonable that he will have some of Byron’s notes and journals which may contain the information we seek.  Thus, we must meet with him. After failing to obtain an audience with him, another opportunity arose.  A local, Mannie Morkan, approached us with a particularly upsetting story that grossly highlights the depths of Bruno’s depravity.  In short, he violated a young woman in the most evil way.

Mr Morkan has also made us an offer.  If we will avenge his daughter by killing Bruno, he will help us gain access to his home and give us Veralis.  How he came to have this sword is unknown but Veralis would prove an invaluable tool in the fights to come.  One I am prepared to do what is necessary to gain.  Yet, not everyone on the crew agrees.  There is a divide amongst the crew on whether or not killing such a monster would be morally acceptable.  Now we find ourselves debating the issue.

While I consider upholding a moral code an honorable thing, this is not the time for such restraint.  The fate of Caribdus hangs in the balance and to stumble over something like killing a vile criminal, which is insignificant in relation to the lose of our entire world, would be the height of foolishness.

Do not worry, High Admiral, for I will not allow this opportunity to pass us by.  Even if I must act alone.
~Kaliferous, Archmage of the Kraken Fleet