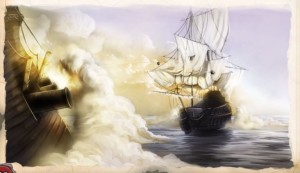 Battle at the Devil’s Spires

The Crew maintained their cover as a gold salvage team in the Devil’s Spires and stayed on alert for Admiral Duckworth. After two days of waiting they were contacted by Crow informing them that Duckworth was making a surprise attack under the cover of the dark moonless night.

Timing his departure towards the Cortez’s ship perfectly, Liam arranged to have a powerful “Crossing the T” volley arranged before Duckworth was able to fire. This damaged Cortez’s ship and allowed Duckworth to further hammer on the unsuspecting Frigate.

After a long ship battle the Crew finished disabling Cortez’s ship, managed to capture a fleeing gold recovery Sloop and rescue the crew of another that wrecked while attempting to leave the Devils Spires.

Duckworth and the Crew sailed to Baltimus to discuss the events that happened and request compensation from Edward Lazenby(Chairman of the British East India Company). Duckworth relayed the betrayal and piracy of of the Spanish Guild and also informed his superiors of the heroic actions of the Crew.

During a meeting with Mr Lazenby the crew negotiated a fair deal on spoils from their actions and recovery of the lost gold. Lazenby awarded them with a Letter of Marque in addition to the promised pieces of eight payment. Duckworth also pledged his support financially to get the Crew back on their feet as believed their reports that the world was flooding and felt the quest was a noble and worthwhile one.

Lazenby also informed them that the BEIC, in one weeks time, would be formally backing out of the Great Port Treaty and marking all Spanish Guild ships as pirates. This allowed anyone carrying a Letter of Marque from the BEIC to seize any assets not properly marked by their company. This will essentially kicked off a Trade War between the two trading companies. Lazenby is unsure on how long it will last but warned the Crew to be carefull when this announcement went into effect.

The Crew is now able to purchase a new ship with their earned spoils and after much hardship they are back on their feet. Where will they go next? Further explore the flooding world? Smuggle firearms to a mysterious contact in the Kieran Empire?

That nightmare has stopped.  I sleep as soundly as I ever did.  Possibly more so.  The cause for this change is obvious.  We killed those pirates and ruined their plans to profit off the misfortune of others.  Specifically, misfortune they brought on.  We even walked away with enough gold to replace our ship.  To do so, we’ve had to make a decision to become a privateer for the BEITC but I believe it was worth it.  Though, it wasn’t a decision we came to lightly.  Several of my friends were less certain about it but with the coming war between the BEITC and the Spanish Trade Guild, we had to pick a side or risk constant harassment from both parties.  Hopefully, we made the right choice.

I know this is counter to what people always say, but the unleashing of my furry on those scum seems to have satisfied that vengeful hate I felt for them.  I’m willing to bet people who claim vengeance doesn’t bring closure have never truly suffered great loss or sought absolute restitution for such a loss.  Or maybe something is wrong with me.  It doesn’t really matter, though.  Justice has been executed and my soul finds rest in it.