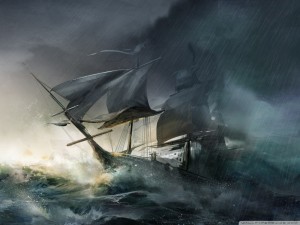 Shortly after leaving Stumpy Pete’s “Island of Death” with a cargo loot the ship encountered a terrible storm. While in the storm Crow spotted a battered Galleon rising out of the water and heading straight towards them, seemingly not affected by the raging storm. The Galleon pulled along side of the ship and lowered two gangplanks. Standing on the deck and glaring at the crew was none other than the dread ghost pirate Redbeard Rufus. Hearing shouts but seeing no pirates the Crew prepared themselves. Rushing over the gangplanks and appearing out of thin air ghostly pirates started attacking the the Crew. Over the din the Heros heard Redboard yell “Find whats mine and then sink the ship”

Heroically the Crew was able to repel the invaders taking advantage of the Mages elemental ranged attacks at Redbeard and giving them time to escape. This lead to a chase at sea with the ghost ship following and Daxon nearly being washed overboard. After a long sea battle and expert piloting the ship was about to out pace the Galleon and make for a safe Harbor in New Madrid.

While in New Madrid resting Rodrigo and Daxon spend time trying to find some answers about Redbeard. They discover that he was a horrible pirate that murdered, pillaged and ravaged across the lands until finally captured by the Kieran fleet. It was said he wore a golden triangle on his neck and when they tried to hang him he would not die. So the ended up cutting his head off and both his head and triangle tumbled into the sea. It is rumored he has a massive horde of treasure somewhere and he roams the seas looking for his lost. His final words in life was a curse upon himself that he will never rest until he recovered his lost loot. 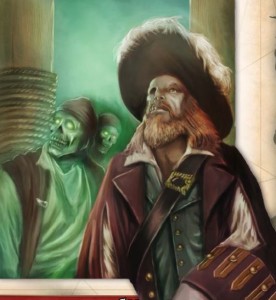 Today my heart soars, so I intend to rhyme,

The Poem of the Sad Ghost Pirate

A ruthless ghost pirate sailed out of the mist,
a magical triangle his crew did insist,
he wouldn’t take nay,
he wouldn’t back down,
he sent all his men,
we marked them to slay.

He called out his name, Rufus Red Beard!
as if by the name we would be afraid,
But he made a great error,
he attacked us before,
he was able to know,
that this crew has God’s favor.

His ghosts were defeated and the specters undone,
Even Rufus was touched, and our day clearly won.
With fist in the air
and a hearty heavy ho,
we departed the thief,
none worse for the wear.

Captain Liam showed a great deal of confidence in me to stand in his stead as we left the island. He was in no shape as they dragged him aboard. He was right cavalier about the whole incident but to hear the priest tell it, Liam near died out there. They may all have bought it had it not been for the crab. I refrained from telling anyone so. No need and besides, they recovered old Stumpy’s treasure and came through it like we always do – by the skin of our teeth but still standing tall. I do wonder what more they may have brought aboard with all that gold – curses, bad omens, and the sea hags know what else.

We made quick time away from the cursed island. The wind mage once again coaxed more knots from our modest vessel than I would ever thought possible. Was I too proud at the helm as we plowed through fair seas? Surely Captain Liam would not have missed the signs that a storm was brewing, but it overtook my vigilance with unnatural speed. I lashed myself to the wheel and began barking orders to the crew. If the boys doubted me, they did not show it.

The CROW was the first to spot the ghost ship. I swear the waves did not touch her, and not a soul was on board save for the captain. The visitors did not know what to make of him, but every child of Caribdus has heard the bedtime stories of Rufus Redbeard. As ruthless as they come, and he did not disappoint. The crew could barely man their stations before the ghost ship was upon us. Try as I did to maneuver away, the massive ship mirrored every move and loomed over us. This crew has been through some tight spots, but I knew we would not come through this without a miracle.

That miracle shook off a gaping head wound and took the wheel from my hands. One look into his eyes and I stood aside for The Captain. He has a way with the ship and the waves, and the men respond to his commands like no other. What he did in the middle of that storm with Hell’s Galleon bearing down on us cannot be described. Even so, they boarded us. Undead pirates bent on claiming something from the treasure we took. They would not have it this day. I will not call this crew ragtag ever again. Though we are still unknown, our reputation grows.

Spirits were high after defeating the legendary Redbeard, but no one would deny being relieved once we made port back in New Madrid. I was able to meet up with Gop and trade for some information about the golden triangle that was among Stumpy’s treasure. Apparently it once belonged to Rufus Redbeard and he is cursed to roam the afterlife in search of it. I really do not want to end up as another ghost tale told to scare children.

That monster left me with a ripe ol’headache. So when we returned to the ship I gave the helm to Daxson and went to me cabin to sleep some of it off. I would have given anything for glass of good scotch, but the drink is a rare thing here in Caribdus.

I was sleepin like a baby that’s been sipping on granddaddy’s brew when I woke to a flurry of noise and activity on the deck. I could tell we were in the midst of a storm, but storms have never bother me. It was the nature of the commotion. It wasn’t the norm for a wee storm. So I threw me boots on and came out to see what the bloody hell was going on.

Turns out we were being chased by some banged up ship. It was a strange sight, to be sure. She cut through the water like something possessed and was gaining on us fast. I ran up to the wheel to take charge and put some distance between us and that ghost ship. Lady luck wasn’t with me and the hellish ship caught up to us. The only sole on board was a lone fella that had to be the captain. And the bastard wasn’t steering. Nope. The ship just knew it’s coarse. Like it was alive, itself. I’ll never admit it to the crew, cause they’ve got to have faith in their captain, but the sight gave me chills down to me very bones.

When it pulled up next to us and dropped planks, I couldn’t believe what I saw. An entire crew of men started appearing out of thin air as they rushed aboard. Everyone kept their heads, focused on their task, and we broke free. It was easy enough to lose the bloody thing after that.

The crew performed admirably. I’d say they deserve a round a drinks on me at the next tavern. And to have their deeds officially recorded.

Mordecai and Rodrigo gave that ghostly captain more than he bargained for. I’ll never forget the look on his face when they unleashed the full force of their gifts on him and his. For men of the cloth, they pack quite a punch. In some ways, they remind me of some of the clergymen that joined the revolution. Kind hearted souls as gentle as a kitten until you cross the line. Then they’re all fire and brimstone and full of piss and vinegar.

Daxson danced all about the melee and sent more of those spawns of hell into the drink than most men would’ve. Before it all started, he handled the Abrams well during the storm. He consistently proves to have been a wise choice for 1st mate. I’ll need to have him work on his footing, though. The poor lad fell over board at one point and I thought we’d lost him. He managed to grab a rope at the last minute and saved himself. That lad has more lives than a cat.

Old Captian Redbeard, Daxson filled me in on who that ghost was, had the wind knocked out of his sails this day. I doubt this’ll be the last time we the bastard.