Back in the Saddle With Savage Worlds 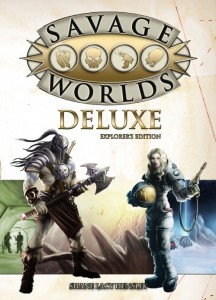 I have said in recent months that while I love to play Savage Worlds I was not sure I wanted to run it again as a GM, mainly because the crunch level is a bit higher than my preference. But I’ve changed my mind! I want to run Savage Worlds again!!! Here’s why.

My chief complaint about Savage Worlds was the complexity. Most of this is due to rules mastery — I don’t easily pick up new games. But with others at the table to assist when I forget a rule, and with a group excited enough to run Savage Worlds for months or years, I do think I can master the rules. I just need more time in the GM’s seat.

I think I can overcome my complaint about the ‘mini-math’ of calculating raise by using a raise calculator for high scores that don’t immediately divide easily (in my mind) by 4. Plus I can rely on the group to assist in such things and keep my calculations honest.

One reason I was gun-shy about Savage Worlds was the last time I ran it (July 2013) I ended up having a lame mini-campaign. Two very vocal players in the group in McKinney were I was playing at the time did not like Savage Worlds. However, on reflection and playing with them in subsequent games, these two players in my old McKinney group don’t like any game written after 1985. Honestly, my confidence in my GMing skills was a bit shaken after my last few games in that McKinney group. But by running so many fun games since then I realize that was a chemistry mix / game system-to-gamer fit issue, not a fundamental problem with my GM skills, and certainly not a problem with Savage Worlds. With the Saturday Night Dice group, I think I can run Savage Worlds and have the players appreciate the game system and be interested to learn the rules and play in Savage Worlds long term.

It has plot point campaign books for many settings. One of my big weaknesses is having the time to design great set piece battles. I’m good on story, not so much on combat scenes. Also, I tire of campaign books which are dense, walls of text. I much prefer one-sheet adventures and concise plot point campaigns which I think would aid me in the things I have less time or skill to put together (like set piece battles and sandbox tools and tables) while still being loose enough for me to weave in custom sandbox adventures tailored to the characters backstories and interests. Plot Point campaign tools are the perfect fit for my loose GM style.