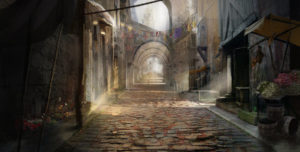 As Torquemada’s minions battered me into unconsciousness, I found myself drifting, in a timeless float towards a familiar place.  Old Valencia, and the Via Pared d’Azul (Blue Wall Street).  When I was a child, I knew every corner, every shoemaker’s stall, every flower vendor, every fishmonger’s bucket.  As I grew up, I would return to visit.  The old smells of the street would instantly transport me back to a time of comfort, of safety and innocence.  But this time, when I returned, things were different.  My old street, always so full of life, was dark.  Instead of fresh flowers, I smelled death and decay. No vendors opening their stalls.  No fishmongers yelling out that day’s catch from the Mediterranean. Only decay and darkness.  I walked the street, and in the distance a cowering figure walked slowly in the distance.  I quickly approached, desperate to inquire as to what had befallen my street.  Plague? The Moors? The French on a sea raid?

I caught up to the figure, grasping its shoulder, and spun it around.  Of course it was My grandmother, Mi Abuela.  At first I exulted.  She was free from that Inquisition prison cell! She frowned, turned back walking.  I was confused.  I called out to her. She kept on walking.  I rushed in front of her and stopped her in the street.  I grasped her shoulders and pleaded for her to explain.  She pointed her old, boney figure at me, and nearly spat in response, “You are not allowed on the blue street yet. You are not finished. El Mundo Agua necessitate. Yo espera hasta se regrese.” With that, she faded.  I saw the bars of her cell once again.  I knew she had talked to me from her cell, although I did not know how. Then light began to fill the street.  Vendors began to open their shops.  The smell of death started to fade.  At that, I knew the street and my body were the same.  As the street healed, so did I.