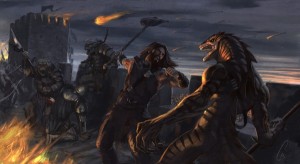 Told through the eyes of Justin Ironoak, heir to the Iron Oaks

Justin withdrew his warpick from the twitching body of the orc he had just slain and surveyed the battle around him. He had broken through the line of orcs defending the tower, and was standing along the wall, beside the doorway into the tower that housed the strange, but powerful, weapon. He saw his brother standing atop a hill, deftly gesturing and firing bolts of pure heat to his foes. He loved his brother dearly, but never had felt quite as close as brothers ought to be. Maldrin spent more time pouring over his tomes, seeking the proper wording of some archaic spell, than he did outside. On a certain level, Justin felt this was wrong. The Ironoaks were men of the forest. They ventured out into the unknown wilds and tamed them. They didn’t hide behind their Oak Doors. But at the moment, he was grateful that Maldrin knew the ways of the elements, for it brought them great advantage in battle.

Sted and Sebastian were back to back, holding their own amongst the orcs bearing down upon them. Sted was more than competent as a combatant, and Sebastian, for all his talk of being a holy man of peace, swung his mighty Warhammer with the practiced ease of a man accustomed to violence. Kurst was charging towards another pair of orcs, roaring with rage. Kurst was not a man to be underestimated, his blades a flurry as he pierced the orc over and over.

Justin saw the dark form of the thief on the other side of the door, trying to be as unobtrusive as possible and avoid the notice of the orcs. Justin sneered unconsciously at his behavior. He had little love for the opportunistic thief, talented though he was. Justin was forced to constantly watch his belongings around the man, and knew his loyalty only extended as far as his convenience at the time.

At the far end of the battlefield, he saw Neara patiently and quietly biding her time amongst the trees. He was grateful she was not getting involved. The plane of forever had revealed his, their, future together. Justin did not know what fate truly had in store, but he knew that now was not the time to ponder such things.

As he scanned the field of battle, he realized he did not know where Aelred had gone. Concern welled in Justin’s chest as he considered his fellow hunter. Whereas Maldrin and himself stood across each other, separated by the canyon of the arcane, Aelred and Justin were true kindred spirits. They had hunted together and tracked together. While Justin was as savage a hunter at could be, taking down a full grown bear by himself in close combat, but Aelred was unmatched with his bow. Aelred said that he could pin the wings of a fly from a mile away, and Justin couldn’t help but wonder if he was truly exaggerating his prowess or not. Combined with his deep bond of friendship with his panther, Aelred was a hunter of the highest caliber. Reminded of his animal companion Justin instinctively reached down to pet the head of his wolf who was no longer there. Justin’s eyes burned as he felt the longing ache for that deep primal bon. But, again, there was no time to mourn. The strange weapon atop the tower must be stopped, or turned to their own purposes, or Silver Thorn would be lost.

Justin readjusted his grip on his weaponry, his war pick and war axe, and prepared to storm into the building, when he heard the hum of the strange weapon reach a crescendo. He was too late! The whine of the weapon peaked, but the blast was punctuated by a scream of pure agony. The destructive red light blasted forth, but shockingly had struck the ground not twenty yards away!

“Must’ve been Aelred. Crazy sonofabitch did it!” He muttered happily. He looked up at the parapet, and his joy died on his lips as he saw orcs manhandling a form.

“Aelred!” Justin shouted and ran into the tower, barreling up the stairs. He would not let Aelred be slain. His companions heard his shout and swiftly followed.

As he reached the top of the stairs, he saw there were two warrior orcs, and what appeared to be three technicians for the weapon. As his companions arrived behind him, he saw the orcs being to look less confident. Justin knew he had a chance to solve this without bloodshed.

“Surrender, and you will live. You are outmatched, outnumbered, and outgunned. But make one hostile move, and your lives will be forfeit. The dozen orcs below should tell you how serious I am.”

The orcs looked at each other, shrugged, and dropped their weapons. Justin mentally breathed a sigh of relief. Fortunately for him, Orcs are not very intelligent and they failed to realize the value of their potential hostage. Justin looked over Aelred. He was tied up, but he didn’t appear to be too injured aside from the blood that led to his….

“Holy shit your arm!” The thief exclaimed. Aelred’s entire right arm was missing, his shoulder a burning mess of charred skin and muscle. Agony rippled across his body with every movement.

“Out of the way, let me attend to his wounds.” Sebastien pushed every aside and knelt next to Aelred. Summoning the holy light of his god, Sebastian laid his hands over Aelred’s body, and Justin could see the flesh of his shoulder mending and the charred skin sloughing off, but no new arm grew. After a few moments, he stood and looked at Justin with a dark expression. “His arm has been completely destroyed. I have not enough power from my god to restore him. A grand priest of my order could, perhaps, do something but that is a power granted to only the holiest of men.”

The group broke into disarray for a few moments. The thief inquired after whether or not Aelred still needed his magical bow, Maldrin suggested if he was in too much pain to continue that perhaps a mercy killing might be necessary, and Neara merely looked shocked. Aelred had always been such a strong figure, but without his arm he looked surprisingly small. Justin saw the tortured look in Aelred’s eyes that went beyond the pain of losing his arm. He knew that he would never feel the power of a fully drawn bow again.

“Sebastian, attend to Aelred, do what you can for his pain. We’re not out of this yet. Maldrin, investigate this weapon, let’s see what we can do with it. Kurst, interrogate these orcs, find out what they know.” Justin barked to his companions.

Much was learned in a short time. The weapon would fire automatically every ten minutes, although they could adjust the time to up to a full week. The weapon was too large to remove and abscond with, and even then would still have to be fired at regular intervals. To make matters worse, one of the technicians pointed out a marching company of orcs coming their way. They would arrive before the cannon could be fired again.

This information set the group roaring with argument once again. Maldrin suggested we still try to take the weapon, Sebastian demanded we destroy the device, and the thief quietly recommended they flee and hide until this was all over…the craven, Kurst suggested forcing the orc captives to stall the army and let the gun fire, with no one agreeing to anything. Shouts and threats of violence began to reach a fever pitch until two quiet words were spoken.

“I’ll stay.” Aelred said, propped up against the parapet, his words almost a whisper, but somehow managed to silence everyone else.

“I’ll stay. You flee to the secret entrance to Silver Thorn. I’ll hold off the orcs and blast a hole for you to enter SilverThorne. But you can’t trust the orcs to handle this themselves. Someone will have to stay.”

“But why you? We’ll get you to safety. The Silver Oak will be able to heal your arm! I’ll stay, I’ll defend the tower.” Justin said.

“No, my friend.” Aelred said with a sad smile. “You must go. You’re an Ironoak. It’s up to you to fulfill the prophecy. I’m no Ironoak, I can stay.” Justin knelt down and looked Aelred in the eye.

“Today my friend, you are braver than any Ironoak. In your veins runs the courage of ten men. Hold them off long enough to get a shot off the weapon, then set it to a week to recharge. We’ll be waiting for you at the entrance.” Justin said. Aelred smiled, shakily stood up, and pulled his bow off his back.

“Justin, take this. It’s not good to me now, and no filthy orc deserves to get a hold of Ironoak weapons if I should….”

“You’ll make it. You had damn well better! I’ll be waiting.” Justin interrupted, but he took the bow all the same. Justin clapped Aelred on the shoulder and turned to the thief.

“You. Give Aelred your ring.”

“You’ll give him your gods blasted ring or I’ll cut it off your hand this instant.” Justin warned darkly. Sullenly, the thief petulantly handed his ring over to Aelred.

“You better give that back, or swallow it if you’re gonna die so I can find it again.” The thief said. Justin bit back a reprimand, for at least the thief was cooperating somewhat.

“No time for delay. Let’s move out!” Justin ordered, and with one last look at his noble friend and companion, he turned and swiftly made his way out of the tower, his other companions following behind.

With a grunt, Aelred struggled to his feet, the holy power of Sebastian reducing the thundering pain in shoulder and missing arm to a dull and distant throb. Aelred spent a few minutes pushing the dead orc bodies into the doorway, then splashing the stairway with a flask of oil he had been saving. Once he was finished, he walked up to the top of the tower and place the ring of invisibility on his finger.

“Three hundred orcs, and I’m beat to hell and back, missing my good arm, have no bow, and have no defenses other than a pile of dead orcs in front of the door. I guess for once those orcs might have a fair fight on their hands.” Aelred mused as he pulled his rapier out of his belt and prepared for the coming onslaught.