The Party continued their struggle against the mighty Hill Giant stedding, fighting both giant and fire.  The Rogue, having appeared to have fled the battle, instead came around to the front of the stedding, He first scaled the tower, and then lit it on fire. It went up like an Aradene candle, and turned night into day for miles around.  Assisting in the inferno were several casks of Hill Giant Ale. The party continued to fight their way into the fort, soon coming face to face with King Snaggi Irontooth of the Hill Giant Jarl. The battle ebbed and flowed, with several characters being struck down temporarily, until finally Snaggi was gutted, large giant entrails spilling unto the hot log floor, making a sizzling sound and reminding the party they hadn’t had breakfast.

In searching the main floor of the hold, the party discovered the two ever flowing Fonts of Mymirdion.  The water’s origin unknown, the water ever flowing, the party had discovered the Giant’s true wealth.  The two fonts gave the ancient healing aqua blue waters to whoever possessed the fonts.  One catch, the glass flasks that could hold the Healing waters of Mymidion had to contain human bone.  This gruesome catch gave the body pause.  But not enough to stop them from filling all twenty of the available flasks and distributing them throughout the party.

Soon the party made it through the rest of the first floor of the hold, and went downstairs into the dungeons of the stedding.  They quickly found the cells which held several prisoners, including Randolph FireOak.  Reunited with his loyal son Derrick, the two then joined the rest of the party in fighting off four elementals, summoned by the eveil white wizard, paired with the traitorous Harren Fire Oak.  Having occupied the party, Harren and the white wizard fled, leaving the party to battle the elementals.

The party emerged victorious from the partially destroyed stedding.  The cleric began to make plans to gather his brothers to occupy the powerful site, now partially burned.  In the meantime, the party crossed the small plains to the Town of Fire Oak, to find not only that the Fire Acorn had dropped, but that almost all of the Oak Clans had gathered, having seen the Stedding fire of the Hill Giants as  a beacon.  Randolph Fire Oak and  Justin IronOak found a table, and rolled out the ancient Oak Scrolls.  On the top, the two quickly read the Prophesy of the Oaks.

When Acorns drop and clans depart, all the Oaks will leave their home.

Abandon hearth, abandon glades, all of the clans will start to roam.

Through foaming waves, to distant shores, the twelve bound Oaks will sail the seas.

In search of Oak land, the promised land, away from hardship, rise from their knees.

Abandon all their hard won holds.

To join so strong to leave the fall, to build anew, with gathered all.

And so, absent the Blood Oaks, 27,000 Oaks all stood ready for one last march through Westmarch, to relieve Silverthorne.  The party, led by Justin and Neara BloodOak, requested the party journey to Blood Oak, as a message had arrived that the Blood Oak had dropped, but been taken by a band of Frost Giants and a Black Dragon. 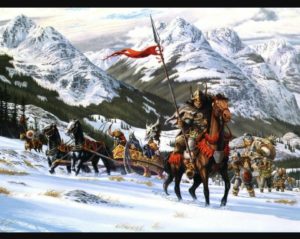