[su_row]
[su_column size=”2/3″]
The IA Lunch League is back in action with another exciting match up. Coming off a stretch of great matches in which both players honed their skills and strategies with the same list, they were looking to try something new. Mason was ready to the take the Imperials for a spin while Jim Bob was excited to try out some of the newly acquired Rebel expansions.

Mason
The Spice of Weiss
Jim Bob
The Wamprats

Trying out new lists means all new capabilities and strategies and plenty of room for error. But it also means lots of fun like running around in a giant AT-ST, stomping on fleeing Rebels. Or setting loose a couple of raging Wookies to run interference for your elusive Smuggler. The only thing more fun that putting a new list together is actually getting to play it. So enough talk, let’s get to it.

This map was new to both players so strategy was mainly being worked out on the fly. Mason took the upper deployment zone and Jim Bob set up at the bottom. The object of this mission is to the retrieve the datalink and upload it to the red terminal. There’s only one datalink though, worth 16 victory points, so the victor will undoubtedly be decided the hard way. On the surface this looks to be an advantage to Mason whose list is built for power as opposed to Jim Bob’s light and mobile squad.

Using the nimble smuggler, Jim Bob attempted a quick smash and grab for the datalink while Luke and the wookies tried to create a diversion. Mason was not to be fooled, using the powerful General Weiss and superb positioning to cover both approaches and take out Luke early in the second round. Luke’s sacrifice allowed the smuggler to escape with the goods and began a dangerous game of cat and mouse between the two sides. Jim Bob’s Wookies dove into the Imperial line with the Saboteurs backing them up, but the AT-ST proved particularly good at soaking up damage. (where are those stupid ewoks when you need them?) 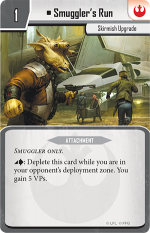 Trying desparately to avoid the awesome firepower of General Weiss, the datalink carrying smuggler slipped back and forth across the map while both sides traded fire. The Wookies were able to take out the Imperial Officer and a Royal Guard but fell before they could stop Weiss. The trio of Jyn, Gideon, and C-3PO were able to put an end to the E-Web Engineer, but the remaining Royal Guard slipped through their ranks to chase after the Saboteurs attempting to finish off the General. In all the fray, the Smuggler made a run through the enemy deployment zone to pick up 5 critical points before the AT-ST picked him off.

Beginning with the last activation of the 3rd round, there were 4 lead changes with the outcome being decided on the final roll of the game when Jyn was able to take out that last Royal Guard. All in all this was an extremely close game to the very end. Had the game not been stopped for time, it may very well have turned out differently.