The Saga of Sigur 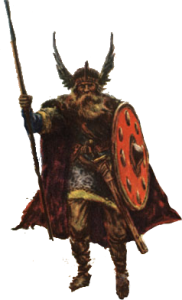 d son of Sigil, Rune master, Defender of the Weak, Bearer of “Gunthar” the spear made from the fragment of “Odin’s Spear – Gungnir”Born in Jamtaland (p33) before Fimbulwinter when Jamtaland was a wild frontier and habitable.  His birth father ÅSBJÖRN (Meaning Divine Bear) was a rune priest, he had long brown hair with a long beard.  Some said his soul had come back from Vahalla and he had mastered the power of rune magic and the ability to transform into a bear.  His birth mother was  Göndul (Meaning wand wielder) was a woman of incredible beauty with flowing blonde hair and strong lines.  She was Seithkona and quite a free spirit, who was known as a wise woman.  She was also an expert in magic of death and the dead, balancing this, she also worshipped Freya (the chief of the Valkyries) and respected the dead once they have fallen..When Sigurd was only 2 years of age, giants believed to come from Norrland came to raid and destroy the frontier of Jamtaland.  Both ÅSBJÖRN and Göndul were charged by the Jarl with the defense of the northern boarder.   During a two month set of battles they were slain but bought the Jarl time to levy some more troops to defend Jamtaland.  Sadly only ÅSBJÖRN was believed to have a warriors funeral as he died early in the campaign.  Many who survived said they saw his soul leave the funeral pyre at the hands of a Valkyrie.  Göndul however perished some days latter when she single handedly faced a horde of 10 giants, she gave her life so that the garrison could retreat back to Jamtaland.  He body was never found.  Sigurd secretly hopes to see his mother in Valhalla some day and aspires to ascend to see his family.All that returned from the battle of the Giants was the “Spear of his father “Gunthar”.  A spear which Sigurd carries even today in memory of family and in worship of Odin…The Jarl “Toberian” took the young Sigurd into his family to be raised.  At the age of 7 a wandering Skald Sigil (Meaning Seal or Sun) a warrior priest of Odin came to see Toberian and claimed he has seen an Omen that if Sigurd is raised in Jamtaland he will die and he also secretly told the Jarl that many of his other people were at risk.  Toberian respects the Skald and his prophesy and allows Sigurd to go with Frode as his assistant.  (Privately (only between Sigil and the Jarl)- The Sun of Odin came to tell the Jarl to leave with his people, but the Jarl did NOT believe fully, when the Fimbulwinter finally comes most all of the inhabitants of Jamtaland perish, so the Omen was NOT just for Sigurd but for many of the people, Jarl Toberian did not want to believe so he ONLY allowed the boy Sigurd to go at Sigil’s insistence).Sigil was a good adopted father for Sigurd.  At first he started to teach him the ways of a Skald, but this was not natural for the boy, then he realized his natural talents were in Rune magic and everywhere Sigil travelled he got the boy training from the local Rune Masters until at the age of 16, the boy had travelled much of the lands and was a Rune Master in his own right…

Sigil and Sigurd, when he reached age 16 parted ways as Sigil said the boy is a man and should make his own way.  Sigurd carried “Gunthar” the spear of his birth father and worships the all father Odin.  He had hoped in his youth to be able to speak with his dead father, and studied diligently.  But has realized he must get into Valhalla to see his parents. So he is continually seeking acts of Heroism to get the attention of the Valkyries, he does NOT fear death and only seeks to aid the week.  After 15 years, Sigurd heard that Sigil had passed in a glorious battle in Iceland.  Sigurd hopes that Sigil also was selected by the Valkyries.

Sigurd has been travelling for over 29 year (now at the age of 45 years old).  His life is filled with deeds of good and kindness, of helping the living, commune with their lost love ones and spreading the word of the All Father…  Now that Fimbulwinter has come, he knows he had little time to die as a hero to see his fathers and hopefully his mother in Vahalla and fight by Odin’s side to slay the Giants to free Midguard from the icy grip..

Look forward to the Heroic Deeds of Sigurd and his Glorious Death!!!

BACKGROUND ON FREYA
Freya is quite independent, being chief of the Valkyries, the demi-goddesses who select the noble and heroic dead and carry them to the Realm of the Gods. Some of the legends say that a quarter or even a half of the dead go to Freya. She is patroness of women who attain wisdom, status, and power, since the Valkyries had been ordinary women, then priestesses, and after being Valkyr became Norns, the Great Goddesses who weave the fates and histories of people and of nations.

Freya is the Daughter of Time, as well as the patron and protectress of the human race. On her breast she wears “the jewel whose power cannot be resisted,”