Steampunk Fate GameScreenshots from the Fate game this past week using the Owlbear.rodeo  virtual tabletop tool.

END_OF_DOCUMENT_TOKEN_TO_BE_REPLACED 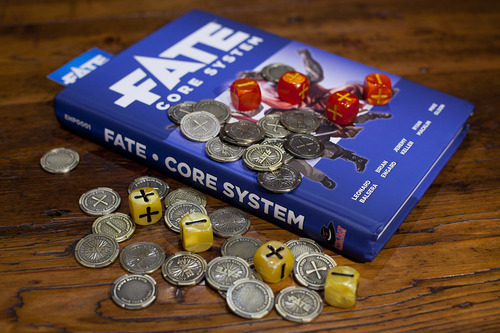 Answers I came up with from my earlier ‘Questions of Fate‘ post.

Answer: Both of these situations are considered ‘Overcome’ skill rolls. So essentially all skill checks are an ‘Overcome’ action. They have the boost result as described under the Overcome rules.

Question: “How do you handle allied NPCs? Can you use Mob rules or is that only for enemy NPCs?”

Answer: Named important NPCs don’t follow mob rules, nameless cannon fooder NPCs do. The same goes for allies. The leader and lieutenants of a allied gang are named NPCs, the troops of that gang aren’t. They are allied mobs.

If you have an allied mob, avoid to send it against npc’s while you control it. You start die-rolling against yourself which is a pinnacle of boredom. To solve for this, give the allied mob to the players.

Another way to handle this: have mobs and anti-mobs neutralize each other and emit situation aspects. Mobs of Jets and Sharks give the “Melodious Gang War” aspect to the whole battleground. Or think James Bond: all those minions switch from baddies with guns to background noise in Goldfinger, Thunderball etc., when Bond’s own minion army shows up. Remove mobs, add the “Bullet Hell” aspect to a few zones.

Question: “What skills you can use for Defend and how/when you can use something besides Athletics to defend?”

Answer: Athletics is a catch-all skill to roll for defense in a physical conflict, against close-quarters and ranged attacks. You can also use it to defend against characters trying to move past you, if you’re in a position to physically interfere with whoever’s making the attempt.

You use Fight to defend against any other attack or create an advantage attempt made with Fight, as well as pretty much any action where violently interposing yourself could prevent it from happening. You can’t use this skill to defend against Shoot attacks, unless the setting is fantastical enough that you can catch missiles or swat them from the air or use laser swords to deflect blasters.

One example exception is sneak attacks. For example, let’s say you failed a Notice skill check and you’re unaware of an attacker that sneaks up on you from behind. See this Google+ discussion.

The Notice skill specifically says it is for defending against Stealth:

You can use Notice to defend against any uses of Stealth to get the drop on you or ambush you, or to discover that you’re being observed.

Seems like if you want to use Athletics or Physique in this situation wouldn’t that be a Stunt – to allow you a second defensive roll? Something like:

Merely a Flesh Wound: You can defend with Physique when you are ambushed or backstabbed and fail to defend with Notice

I would say either:

A) defend directly with Notice vs the attack roll; or

B) roll Notice first, and then apply the MoF as a penalty to your Athletics roll to dodge; or

C) a succeeded Sneak roll creates an aspect you can tag on your subsequent attack roll. Defender defends as normal.

Option C is closer to “pure” FATE. Option B is closer to traditional RPGs. Option A I would use only if the character’s Notice is lower than their Athletics.

On a related note, Fate Core has an explicit ‘Backstab’ stunt which is as follows:

Backstab. You can use Stealth to make physical attacks, provided your target isn’t already aware of your presence.

Question: “I believe someone said Free Invokes could only give you a +2, not a re-roll. Is that correct?”

Answer: According to p. 70 in Fate Core, all invokes, including free invokes, give you the option for either +2 or a reroll.

Question: “A Star Trek rules specific questions — how should skills work when Extra’s are piloting an enemy ship?”

Answer: Simply give them the skill associated with their rating. A +2 Fair extra pilot would use a +2 skill bonus to the NPC enemy ship piloting rolls.

Having run two Fate Core games in the last month where I’ve really tried to use all the rules properly, I noticed a few rules questions have come up in-game. I’m memorializing those here to make sure I research these and also alerting the group so others besides myself can read up on how these should work. 🙂

I noticed that players sometimes get confused when tallying up their skill modifier, adding any stunt bonuses, adding the dice results, and comparing against the GM’s opposing number. If that were the end of it, it would be OK, but as we turn in the Fate Point tokens, and folks spend additional Fate Points to do re-rolls, we sometimes forget how we got to those original numbers. I’m wondering if there are some best-practices like putting all your Fate Point tokens on a special mat so you can track how many Aspects you’re invoking or some other way to help players and GM alike keep track of the math as you progress through your evolving numbers to get to your final results.