Redmark Session 31: Man on a Buffalo! 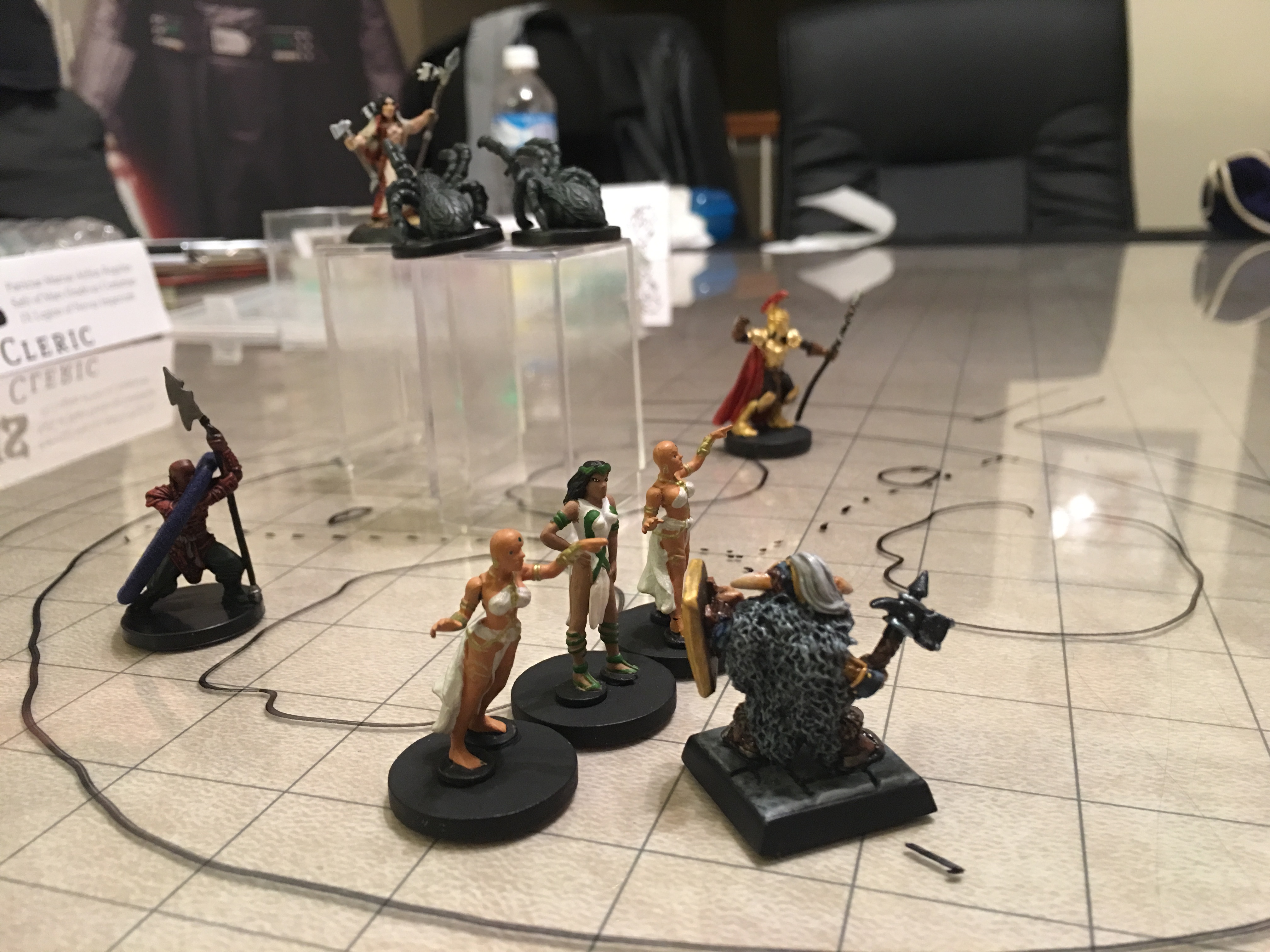 The party finds themselves at the base of an impossibly long rope-and-plank bridge. It rises nearly a mile up the sheer face of a cliff, hanging over a depression roiling with fog. The heroes decide to camp the night and enjoy the amenities of Leomund’s Tiny Hut. It’s a nightly rave now. 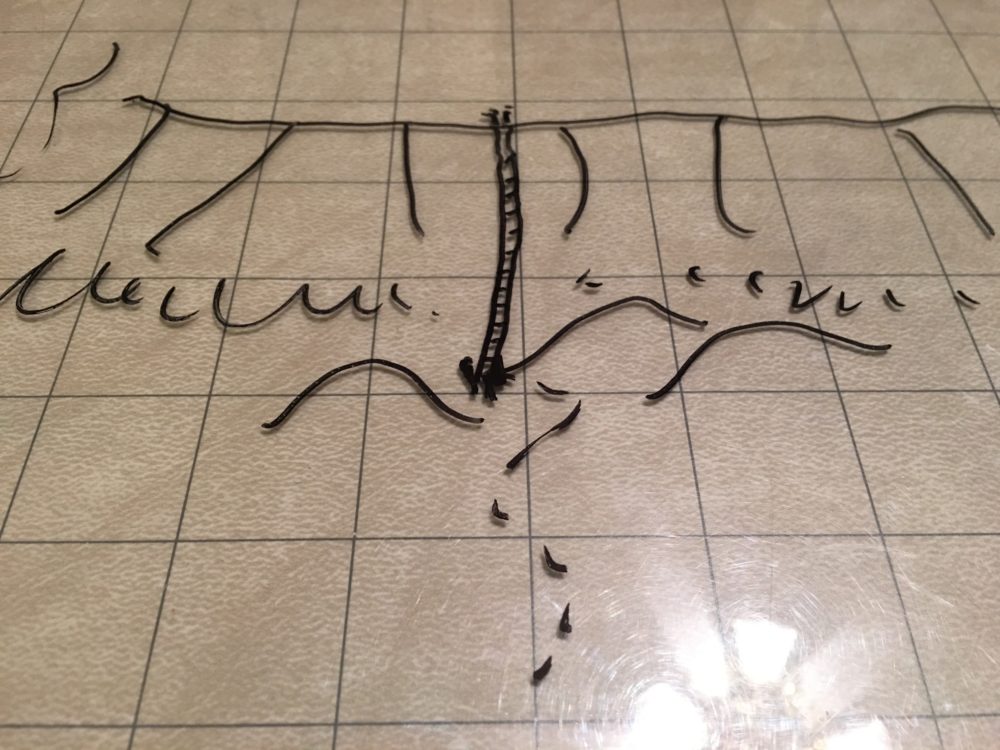 The heroes climb the rope bridge. Reassuringly, an earthquake tremor occurs just as they get on the rickety old bridge.

It takes four hours to climb the bridge to the top, and it gets progressively steeper and more difficult. Near the end, it’s like climbing a ladder, and several in the party get exhausted as they climb.

Near the top, Lundie crests the ridge of the cliff just as another earthquake hits, violently shaking the bridge until it snaps just below the party. Most of the party manages to hold on, but Akamu, the eagle-eyed barbarian native, tumbles off the bridge.

However, thanks to the mighty strength of Marcus, the Roman priest suspends Akamu’s fall and saves the party.

Akamu finds Bugbear tracks on a trail leading into the wooded area on the top of the plateau.

Out of game, Stan apologizes for having lost all his Bugbear minis. To which, Bailey responds: “I have bugbears.” Which sounds like he’s admitting to having an STD. We all laugh and Loftin suggests Bailey see a doctor to have that looked at.

Back in game, sure enough, the party encounters two patrolling bugbears. Ghost Dancer runs forward, lifts his loincloth, and casts Tasha’s Hideous Laughter at a bugbear. Sadly, the bugbear just shrugs and rolls his eyes, unaffected by terrible sight of Lil Ghosty.

The party dispatches one of the bugbears and capture another. Ivamel talks Marcus from the ledge of wanting to adopt another pet bugbear to convert to Mars. They tie the bugbear to a tree, gag it, and continue on the trail. 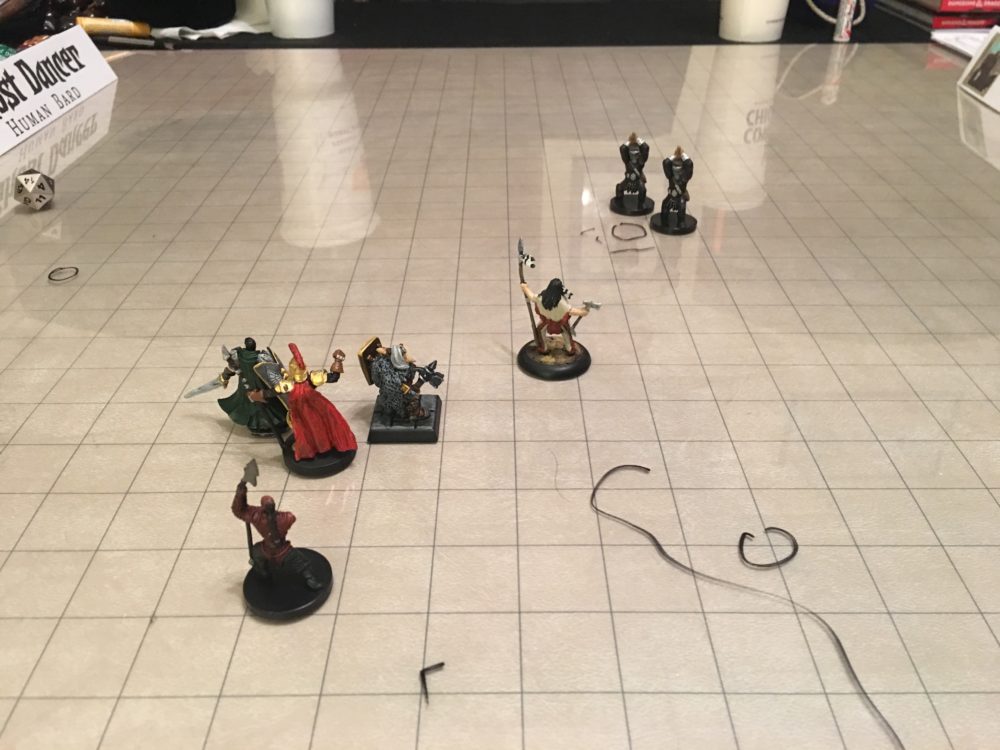 So, yeah. The party discovers what appears to be a fortress. More patrols of bugbears march around it, but the party stealths like unholy ninjas and aren’t spotted. Ghost snorts some pixie powder to fly and casts Invisibility on himself. He floats over, around, and into the compound.

He sees huts on the ground with two hot chicks wandering about. He sees this is not a fortress but a jail—the gates are locked from the outside. Up in the giant trees, he finds huts made of sticky goo. He floats into a hut and discovers a bookshelf and a chest, also made of sticky goo. Ghost can’t resist. He plunders several of the books and nicks a Periapt of Proof against Poison from the chest.

Ghost Dancer returns and reports. Ivamel and Lundie reason that the bugbears have built this prison and hold within it something of good alignment. They decide to liberate the prison on their way back. For now, the party forges ahead to find the mythical buffalo.

A few miles down the path, the party crests a rise that overlooks a lush valley filled with a herd of buffalo!

Ghost Dancer turns into Usain Bolt and sprints to the valley, where he falls upon his knees and offers a prayer of gratitude to the Great Spirit. Then he uses a potion of animal friendship donated by Ivamel, while also casting Speak with Animals upon himself and approaches the biggest buffalo in the herd. He and Ghost Dancer chat for a while, mostly discussing the stock market and what offshore banks they prefer.

The King of the Buffalo welcomes the party and grants permission for them to camp in the Valley of the Buffalo. When Ghost explains the prophesy and shows the King the birthmark, the King feels a tug of destiny and agrees that he and the herd will go to the Land of the Apache to fulfill the prophesy.

As the party argues over how to get an entire herd of buffalo down the plateau cliffs and across the dangerous island and into Kat’s Claw, Fire Willow chimes in that the Chromatic Wizards can help get the herd back to Ghost Dancer’s people. She says that they wizards have been rumored to be near the middle of this very plateau.

Ghost casts Flight on Akamu who rises high and spots a chasm glittering with gold-colored reflections and an island in a volcanic lake where the Chromatic Wizards are rumored to be.

Man on a Buffalo

The party camps. When they awake, Ghost gets permission to ride the backs of the buffalo. Ghost rides the King and Marcus rides atop the one he names Scratchy. Marcus and Ghost hop aboard with huge goofy grins and their faces and they drag race around the valley high fiving and yelling back to the rest of the party, “We’re riding buffalo!”

Ivamel and Lundie just shake their heads and follow along, Lundie on his Celestial My Little Pony.

Marcus and Ghost ride around the valley toward the rising sun, which rises in the West in this crazy place! On the way, they spot an abandoned wizard’s tower.

The party stops to investigate. Ghost and Marcuse feed their buffalo friends apples and nearly cause a riot because they barely have enough to go around.

The group heads into the tower where they find magical treasures stashed in the upper rooms: a circlet of blasting, a bag of holding, and some dust of disappearance. And for Ghost Dancer, a Tan Bag of Tricks! 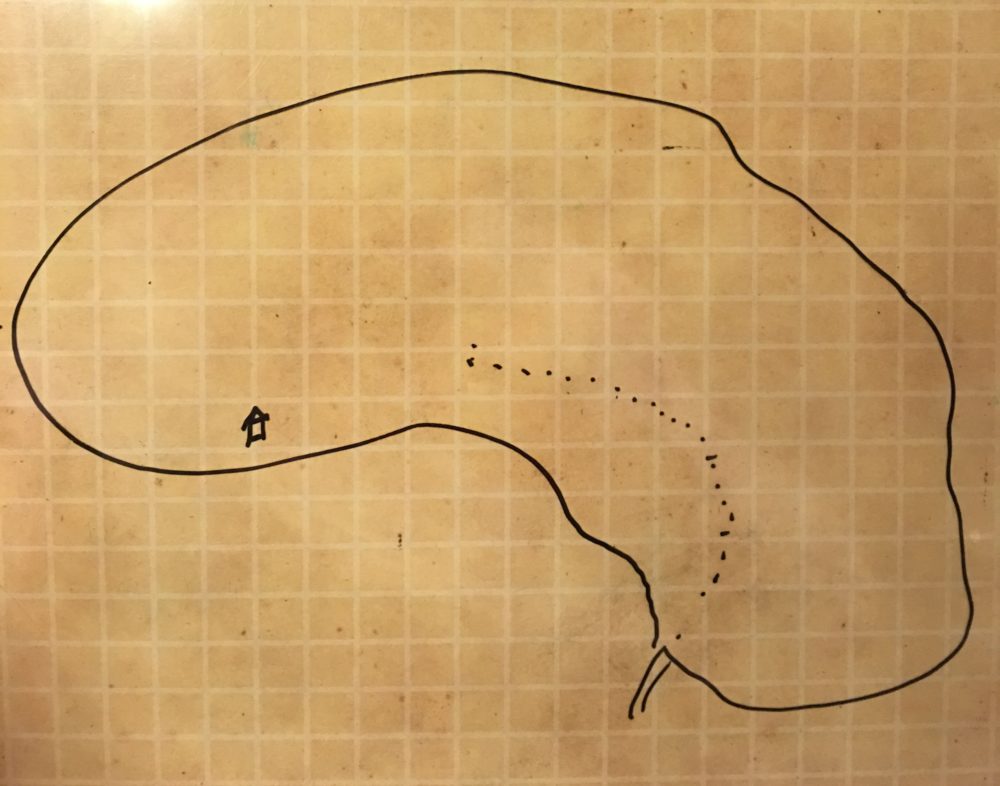 Not forgetting the hot chicks back in the palisade prison, the party journeys back and liberates them.

They, however, are no match for the party, who dispatches them. In the remaining huts, the party finds some oil of slipperiness (wait…what? I guess Quintos will need that for some of his exploits) and a potion of climbing. 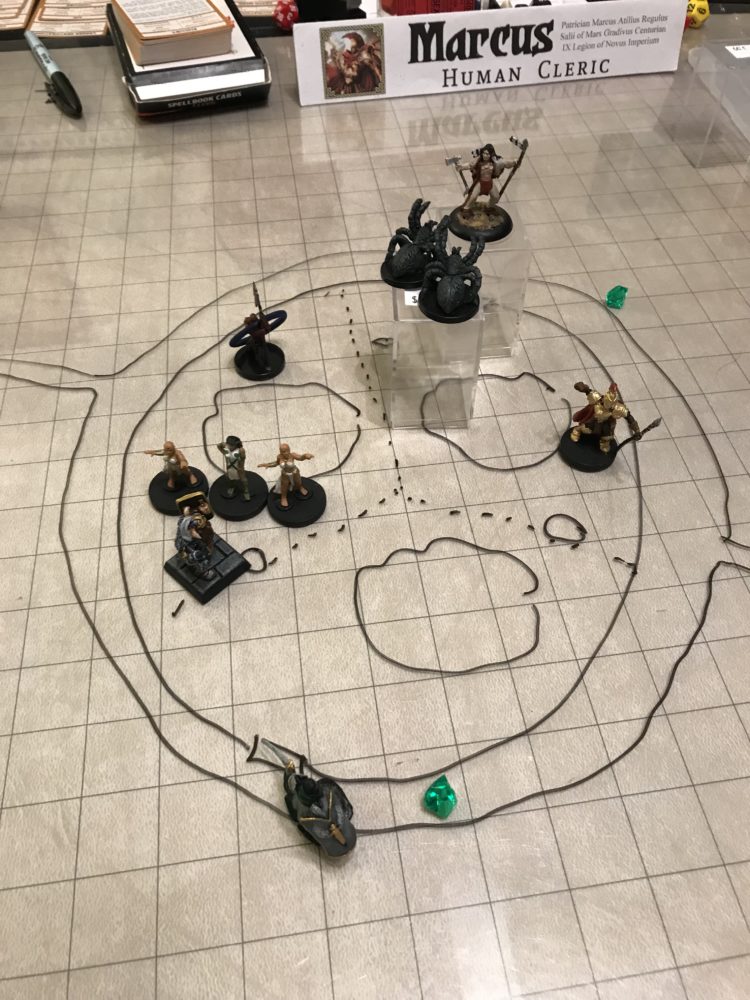 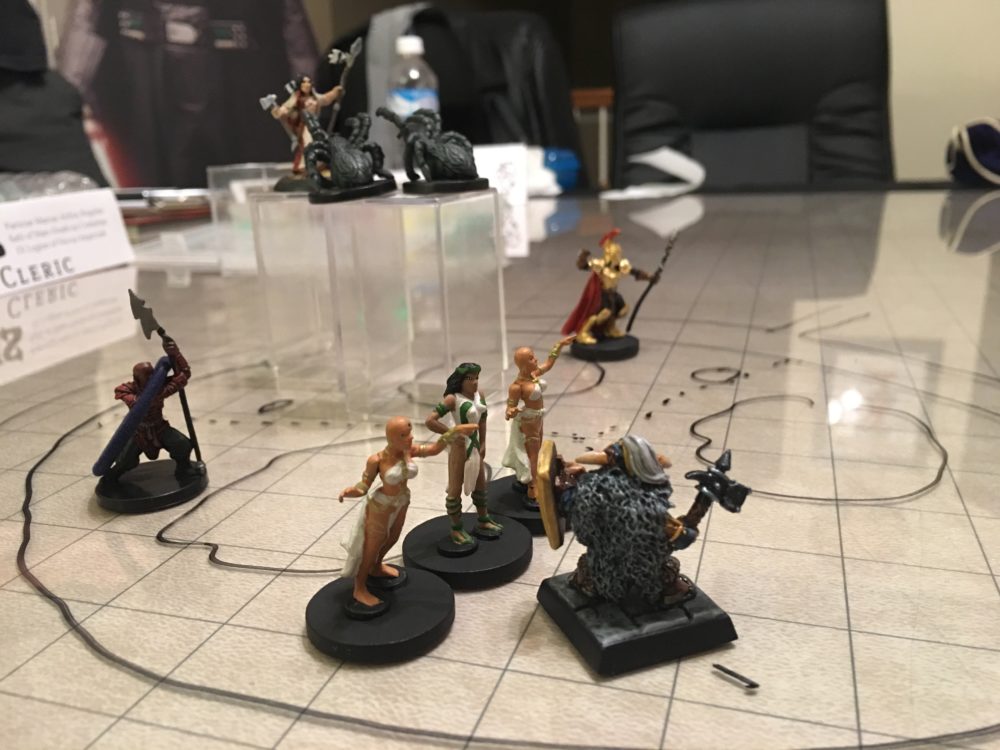 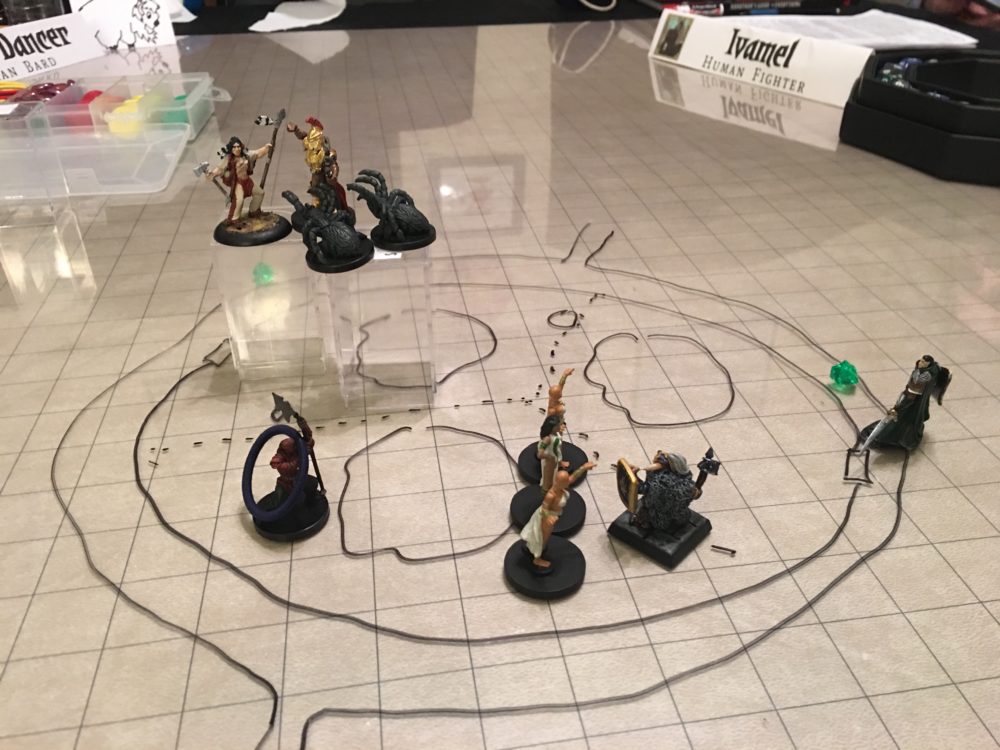 Will the heroes find the legendary Chromatic Wizards? Will these wizards help Ghost get the buffalo herd back to Apache land in Redmark? What’s to be found in the gold-glittery chasm at the far end of the plateau? The party will find out…if they live long enough. 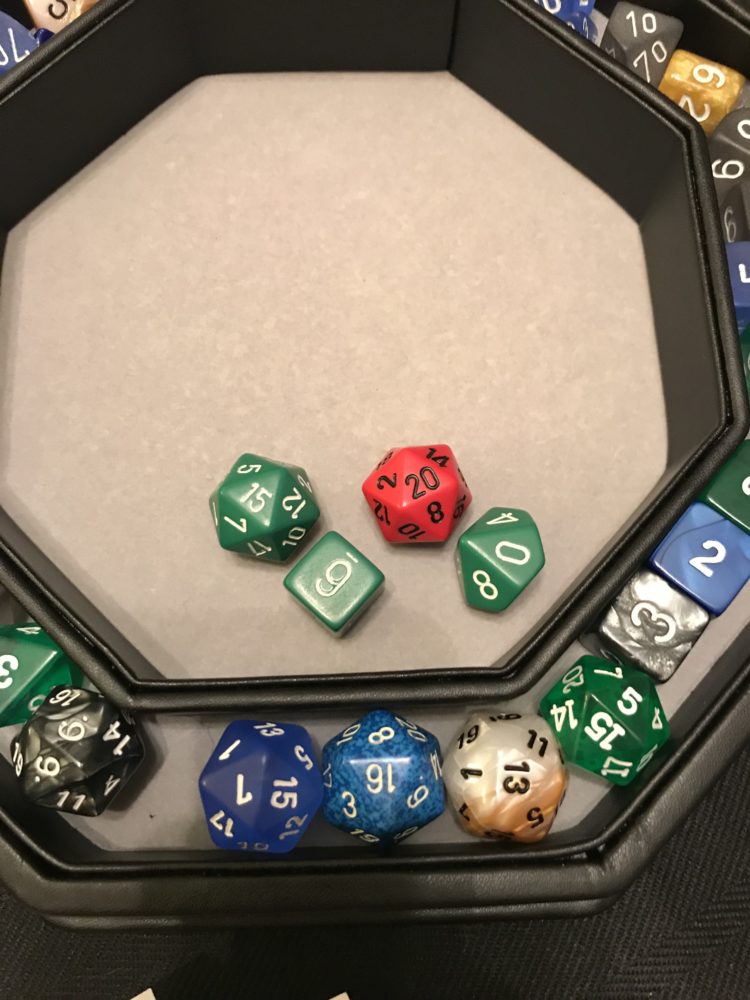