The party met in Norway and found passage to Iceland with a brief stop at Evingard.  They
made some enemies…well, mostly enemies at this point and killed a few undead polar bears. Some of my players typed up an in character summary of what happened.  Here they are.

Sigurd and Thorvald “The Undertaker” have been friends for some time now.  They both enjoy the dead more sometimes than the living.  They both enjoy speaking with the Angels of Death, revere their beauty and roles they play in this land…  Sigurd also sees some of Sigil in Thorvald, while he can be rough on the edges Thorvald is a good man..  Sigurd enjoys travelling with him, life is always an adventure and Sigurd would be honored to die beside Thorvald in a hero’s death.

So our story begins as Thorvald has received a contract to bury the dead (Inga) in a far away land.  So, Sigurd and Thorvald find themselves in need of transportation to Iceland.  They come across a ship’s captain in the port town.  Her name is Bola. Bola is a mercenary/captain who likes gold and calls her weapon “Vira”.  She has two companions Ragnar “the Free Spirited” and Grimnir “the Varangian” a seasoned traveler who has been across many lands and fought in many of them.

Sigurd seeks to negotiate passage on her ship and buys a round of drinks for the bar, then he begins the critical negotiations with Bola and after a short while she will allow Sigurd, Thorvald and Inga (the dead) on the longboat.

Very pleased we agree to meet in the morning to head out..

The next morning upon arrival to the ship, Thorvald and I are carrying Inga.  I have to say it’s more like Thorvald is carrying his end, but my old bones and having challenges carrying my side.  I am also thinking that Inga is VERY HEAVY for such a young and thin looking lass.  Anyway, I struggle, but don’t drop the dead woman….

Upon arrival to the ship we uncover that Bola is not the captain and a bit of a trickster (I think to my self, maybe she is a follower of Loki… She is an attractive girl, but she bears closer observation, I am not sure what motivates her)…

I then discuss with the captain, who finally after we import the criticality of the situation and I offer to help speed up his journey with my rune magics allows, Thorvald, Inga and myself on the ship.  We also have to lash Inga to the bow, Thorvald is always thinking of how to best handle the dead.  Then I freeze her a bit so keep the smell down…

We travel to the Faroe Islands, partially through our journey a Kraken attacks the vessel.  I saw an omen of the attack and realized that the thinner crew would be attacked last, so I sucked in my gut stayed near the center mast and got some of the thinner crew to stand with me…..  Saving a few lives..  Others were all fighting for their lives…  after what seemed like an eternity we fended off the Kraken and continued on our journey, we lost over 10 crew, our mast and had to row the vessel into the Faroe Islands….  A broken ship indeed…

Upon arrival, there was  Blood on the snow, death in the air (my kind of place)…. I started by speaking with Dead, how I enjoy these conversations as the dead do NOT lie, where the living, that is another matter..  I then find out about Undead Bears had attacked the town…

Then as we head toward the entrance to the city, we are attacked by rogues wanting food in the streets.  As Bola was carrying a large basket of fish to sell in the market.  During the fight we quickly defeated the rogues, but Bola lost her mind.  She started talking with another voice and said she did not know how we got here.  Both Ragnar “the Free Spirited” and Gimnir “the Varangian” acted is if nothing had happened.  I secretly thought she might be an agent of Loki the trickster.  I will keep my eye on this one…

As we approach, we see on the branches of a tree. a Black Owl and White Owl near the entrance – I see an Omen that the one that is suppose to be trustworthy may be lying…

When we arrive at the town, Thorvald and others, speak with Guard and find out about Cannibals in Mines, confirm that 12 polar bears attack the fisherman..  Thorvald complements the guard on his lack of intelligence.   We are soo good at making friends…

I start to make a LIST OF WHO WE CAN FIGHT TO HAVE A HEROIC DEATH!!! 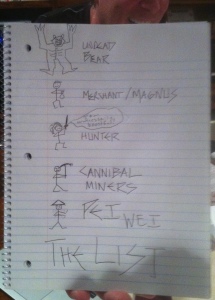 We meet a Godi of
Odin, finally a good person.  During the discussion, we find out there are two immortals in town and the one that represents the Gods, is actually not trustworthy and the other representing the Giants can be trusted. Bola or whoever she says she is now, whispers to me that the Godi knows more than he is telling and may be lying to me..   I directly confront the Godi (as I plan to die a heroic death any day know and don’t have time for pleasantries).    He seems offended, I wonder who is working for Loki here either the Godi or Bola (or who ever she is now)..  I will most likely die soon, so I may not have time to unravel this mystery..

Then we see a very wealthy man, and meet the Merchant Magnus and his guards  We start a conversation with Magnus and realize he is just exploiting these people.  We don’t like him and let him know that..  Then he walks away.. I think HOW RUDE……. So……  I add him MAGNUS THE MERCHANT and his Guards to the LIST!!!

Next we decide to save the town from the Brutality of the Undead Bears (secretly I check the list and believe this might be my glorious death, I am so excited, I may see my fathers and mother soon)….

Meet Hunter Grim (on the List) – He is a skilled and boastful hunter….  (he seems powerful and is maybe deserving to be on the list).  As we speak to him, he is boastful and powerful as a hunter.  But as Thorvald points out, he spends his time boasting versus saving the town from other bears… He claims to have killed one…  For his pride, boastfulness and power he Grim is…………   Added to the LIST!!!!!  We then tell Grim we are heading to get at least two bears pelts to show him we are greater.  I also secretly want to kill all the bears and free this town from the icy grip of BEAR DEATH and BLOOD, hopefully one of the Skald will write an epic saga of our salvation of this town….  I will then get entry into Valhalla.

So we head off west, per the instructions of the Hunter Grim

<OUT OF GAME – MY Loving Wife head to pick up a food order for 6 starving gamers to have dinner…., It takes over 1 hour because PEI WEI gives our food to the wrong people and they have to re-make the order….  FOR THIS!!!!!

So back to our adventurers 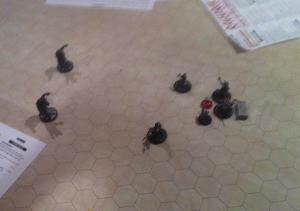 as they sleep on the white snow, approx. 2 am in the night two undead bears attack the camp..  During the conflict we have a glorious fight, blood is spilled on our side and we vanquish the 2 giant Undead Bears….  For more details… Read the “Heroic Poem of Sigurd, the Bears of Undeath and Saving Bola the confused”  (Coming soon)…..

At the end my entrails are being stuffed back into my body, I was moments from death, but this is NOT my time… But hopefully soon…….   We have more Undead Bears to track and kill and I need some rest…..

The Return of Ragnar
After the battle, I wondered to myself, why am I here anyway?  I thought back to when I met my companions. I had arranged for a voyage here because I heard that this place suffered great misfortunes and needed someone to help. I went to the tavern to socialize for the last time before we left, and I met four people and a dead body who were also coming. There was a little trouble when we got to the ship and one of my companions tried to usurp the title of captain. I now know she’s not quite right in the head. After that was settled, we left. A few days into the voyage, we were attacked by a kraken. When it had its fill it left, leaving only 5 or 10 people alive. The ship made it to our destination intact. Noticing that the other ships here had been frozen in and stripped of their goods, we decided to make sure nobody would steal from our ship by burying the goods near the shore. The only thing we didn’t bury was a basket of fish that my multi-named friend brought to sell at the market. At the gate we talked to the guard and heard about the many troubles that beset this town. We started making a list to keep track. On our way to the market we were attacked by thieves who wanted our fish. Then we spoke to a deceitful godi and a selfish merchant/king. Then we went to a famous hunter for advice. He was full of himself, boasting that he had the skin of one of the undead bears plaguing the town. We told him we could get two if he told us where to find them. He told us, and we went. In the night we were attacked by two undead bears. they nearly killed two of us, and after our victory, we
noticed one of them was the one that the hunter had skinned. That put us into overkill mode, and we chopped everything but the heads into tiny pieces and then burnt the pieces. It was a great victory, but our time on this island is long from over.