[su_row]
[su_column size=”2/3″]
This was the first meeting of the IA Lunch League, with Mason and Jim Bob in attendance. Mason had never played the skirmish game type but was familiar with the campaign game and basic IA rules.  To learn the skirmish mode, the suggested map and lists from the Skirmish Guide were used. Mason chose the rebels, so Jim Bob succumbed to the power and seduction of the dark side!

Click the List names to the right to see the specific figures and command cards – built with the super handy IA Army Builder.
[/su_column]
[su_column size=”1/3″]

It’s as if one of the most quintessential Star Wars scenes is unfolding right before your eyes, but this time the fate of galaxy rests on your shoulders (hint: use the force). While there are endless options for putting together your own IA Skirmish Army, the suggested lists in the Skirmish Guide are the perfect starter for a learning the ins and outs of the game. Playing arguably the two best characters in the game (Luke seems to be the popular choice, but there is no denying Vader can wreak havoc on the ill prepared) is a great way to start.

Mos Eisley Outskirts – Get to the Ship (Mission A) 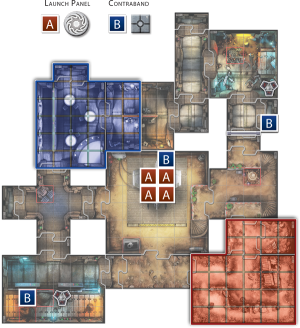 As it turns out, the outskirts of Mos Eisley are an even wretcheder hive of scum and villany! (Ben… why didn’t you tell me?) Mason chose the Blue deployment zone and Jim Bob lined up the Imperials in the Red zone. The primary objective was to control the red launch panels (marked with the “A”) on the ship in the center of the map. Doing so would give you 2 victory points (VP) each at the end of the round or 5 VPs if you spent an action to flip them over. Of course, you can also score lots of points just by blasting the other team (and come on, which one of those is more fun?) First one to 40 wins.

For sure, Jim Bob’s previous experience with the map came into play here, though one should not underestimate the power of Vader going beast-mode on the Rebels. While Luke’s pitiful band had their hands full with the Sith Lord Supreme, the Imperial Storm troopers made quick work of securing the objectives and putting points on the score board. The Rebels finally started to whittle away at them while trying to avoid Vader but it proved too little, too late.