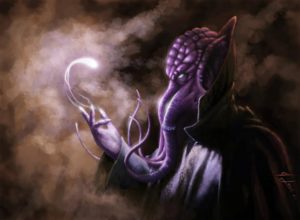 Born 15 years prior to the flooding of Caribdus, Kaliferous began his formal magic training in Tar Tarris under the tutelage of some of the finest mages in the Kraken empire. His propensity for magic was exceptional and he finished his core training early at the age of 10. That he possessed such talent came as no surprise. It seemed to run in his bloodline. One or more archmages had come from every generation of his family for as far back as history had recorded such things. His father was even one of the more prominent Archmages within the Kraken fleet.

After his core training, he was chosen to apprentice under the archmage Terimos aboard High Admiral Caspain’s Great Ship. Terimos was considered one of the foremost powerful mages within the kraken fleet and to be chosen by him for apprenticeship was a great honor. It was also a great challenge. Terimos was a demanding instructor and few proved capable of meeting his high standards. He considered big showy gestures to be for amateurs. While true talent and skill was demonstrated in subtlety, grace, and precision. For four years Kaliferous studied under Terimos’ rigorous instruction learning to master each element. At the age of 14, Kaliferous received what he considers to be the greatest honor of his life. Terimos put in a recommendation that Kaliferous be assigned to a vessel as it’s ship mage. Very few kraken mages where given a position at such a young age. Even fewer received such a recommendation from Terimos. It was a few months before he, now 15 years of age, received his assignment to a kraken sloop.

His great skill and new found role were soon tested on a level beyond imagination. The curse of the three witches had proven real and the world began to flood. Then they returned as the Sea Hags bent on the destruction of Caribdus. The krakens called an assembly and made the decision to gather the fleet to put a stop to the Sea Hags. The ensuing battle was a nightmare. The Hags wielded unimaginable power and commanded never before seen creatures. Near the end, Kaliferous’ already battered sloop was hit with a spell so powerful the ship was lifted out of the sea and thrown a short distance. It splintered on impact and left the crew swimming for the nearest friendly vessel. Kal was picked up by High Admiral Caspain. Seeing the battle had been lost, the high admiral rescued what survivors he could before retreating to safety. It wasn’t long before the true horror of that defeat became evident. The entire fleet was lost and the Sea Hags turned their attention to Tar Tarris. By the time the high admiral’s battered ship was able to limp back to Tar Tarris, the city had been utterly destroyed. Again, Caspian’s war vessel become one of rescue. While they were able to save many, there was no sign of Kal’s mother or sisters. With his father’s death in the battle, Kal was now the only remaining member of his family that he knew off.

This great loss of family and home changed Kal. He became obsessed with finding a way to stop the Sea Hags and volunteered when High Admiral Caspian began sending many of the survivors out to seek a way to defeat them. He read every book he could find on both them and the blood magic it was believed they used. He spoke to anyone who was willing to share information they might have. The unwilling were forced to speak. Anyone or anything that actively stood in his way were culled. Kaliferous knew first hand how significant of a threat the Sea Hags were. So for him no price was to great. No cost was to high. Ultimately, this philosophy is what lead him to being arrested in the Kieran Empire and thrown into the Paltos prison.

While imprisoned here, he met a fellow mage, Tomas. Though being under constant guard made it difficult for them to communicate , Kal did manage to learn that some men had come to ask Tomas about the Tears of Lys. Kal had heard of this during his searching and it was, in fact, the very thing that had brought him to the Kieran Empire. He found it interesting others were seeking it too. He also knew escape was necessary. Being out of water so long was leaving him increasingly weak and he was confident the Inquisition would come. His opportunity soon came. Someone was assaulting the prison in what turned out to be an attempt to rescue Tomas. He was able to convince an unusual looking Atani to free him, as well. The chaos of the rescue and his weakened state made most of what transpired a blur with only a few clear moments. He does know they barely made it out alive and even that was thanks to their captain who didn’t make it.

Whoever these strangers are they seem to be after the same thing as Kal. Given the recent rescue and destruction of the Inquisition ship, he’d even say they’re a capable and daring bunch who’s knew captain seems up to the task. The one question always on Kal’s mind, though, is, “Will they except me as part of the crew?” He knows many view his race as aloof and mysterious and are made uncomfortable by that. His rather extreme philosophy has only made it harder to fit in. Seeing this crew is already a rather hodgepodge one, he feels more confident than he normally does about the prospect.